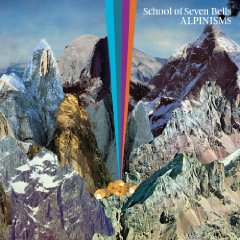 The ethno-tinted dreampop of School of Seven Bells left me stymied and listless and, most crucially for a critic, at a loss for words. But in a fog of cigarette smoke at around 3am this morning, it suddenly hit me: music is a currency. It is meaningless. Riddled with totemism it is little more than a social lubricant; idolised, valued, and used as a means of judging and classifying other people but ultimately a transient representation of something else. Green cash is a token of stocks of gold sitting in a vault somewhere. Music, on the other hand, is a token of human emotion. Music, in itself, has no emotional value. We overlay our interpretation on to it. Songwriters engineer sounds with which we can associate feelings of woe and joy, heartache and orgasm. So, I’m listening to the thrums and swells of “For Kalaja Mari” and I have visions of mountain ranges and that sacred distant untouchable pool of inner peace. But of course I would: that’s what School of Seven Bells want me to feel.

The machinations of songwriting are often seen as an art or a gift. But it can also be a science. It is quite feasible that a band sits down and says, “I really want to replicate that unease you feel when your spatial awareness is knocked, or you lose track of time,” or, if they were feeling a little more poetic, “I want to capture that split second when the surface tension of water stops it from spilling out and looks like it swells slightly over the rim of the glass.” I’m pretty sure that’s the exact thought process behind “Sempiternal/Amaranth.” All those heart monitor beeps, chugging Neu! guitars, and the vocal melody that wanders up and down the scale are a great approximation of that feeling. It’s also very long, which helps.

The other thing music shares with money is in the implication of value. Hence, we have imagery of heads of power on our money. The perceived authoritative stamp that the Queen’s head on the English pound or the all-seeing eye on the American dollar transforms these pieces of paper into something to respect and treasure. Music does it too. We can appropriate the sounds of great bands and we too will be great. On Alpinisms looming large are Neu!, as I’ve mentioned, Silver Apples in the madrigal strains of “White Elephant Coat,” and the shadow of Cocteau Twins’ Heaven Or Las Vegas (1990). Their presence is like that of the Elgin Marbles of the Parthenon: gargantuan and beautiful but feeble representations of the magic of the gods they portray.

But the way music works most as a currency is because we depend on it to make life easier. Music can even supersede money in the way it gives us false hope, especially in times of economic woe (cough). Alpinisms reminds us of this. The figures of peasant fishermen on the inner sleeve of Alpinisms and the liberal use of tribal rhythms and chanted incantations, such as on the opening “Iamundernodisguise” or the joss-stick scented exoticism of “Wired For Light,” coerce the listener into placing School of Seven Bells on a higher spiritual plain. Almost as if to say, “Hey, we live in such a materialistic, fractured, just-in-time society, it’s difficult to remember the simple pleasure of spearing a fish or banging on a drum.”