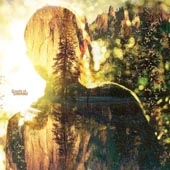 Seefeel’s first album in fourteen years carries striking parallels to Brian Eno’s “comeback” album, last year’s Small Craft on a Milk Sea. Same groundbreaking label (still hovering in a perpetual identity crisis) in dialogue with its own history, same clash with current trends, same casual indifference to emotional cues, same overpowering sonic fidelity, same vague but nondescript hostility. At least in this case, the conversation is a little more timely: while it was always assumed Eno played a huge role in influencing the artists that would spearhead the label, when Warp signed Seefeel in the mid-‘90s it seemed like an acknowledgment that the band didn’t really belong anywhere—that their sensibility owed more to IDM and experimental electronic music than the shoegaze/dream-pop sphere they were often thrust into.

Considering how ahead of the game they were then, you would think the band would have woken up to find their sound had gained some currency, but it doesn’t exactly feel that way. No doubt at a micro-level what Mark Clifford and Sarah Peacock did with guitars and muffled vocals has filtered into the wider indie consciousness by now, but contemporary ambient/electronic artists—I’ve heard Seefeel compared to Emeralds and Oneohtrix Point Never, for example—seem to be predominately consumed with issues of memory, the landscape, decay, technology and a general sense of dread. Seefeel still sound like they want nothing more than make the hairs on your cochlea tingle. This is serious sound art, and it evokes a now near-mythical pre-Recession time when experimental artists didn’t feel the need to obliquely reference the outside world.

To wit: the band’s most recent incarnation includes (along with Clifford and Peacock) Shigeru Ishihara, aka DJ Scotch Egg, aka the guy whose setup is four Game Boys and a mixer, and E-Da, former Boredoms drummer. In fact, my biggest complaint about Seefeel is that it’s not near as bat-shit crazy as it sounds on paper. It is, however, unrelentingly physical and completely void of nostalgia, which are both positive signs. It’s also almost always at least compositionally interesting, and try to pretend for a second that’s not a backhanded compliment.

Take “Faults” for example: there’s a pretty coherent melody here, but the track seems more about the interaction between a deep bass rattle, dry percussion snaps, and wet sparks of glitch. But it also represents everything wrong with this record as well: Peacock’s vocals hem the track into the kind of rudimentary melodies and rhythm that it doesn’t need, much like the crude drum tracks on “Rip-Run.” My Bloody Valentine used elements of pop to add sensuality to what might have otherwise been an oppressive wall of sound; here the same elements seem to rob the tracks of their inherent chaos. It’s telling that transitional sketches like “Step Up” and “Step Down”find more room to work out specific ideas about dynamics and decay (which is where the band has always seemed most comfortable) than a lot of the longer tracks.

But when Seefeel find structure in tension rather than simply layering static over repetitive beats, the results can be staggering. I’m just going to go ahead and use the word “strangled” again to describe the guitars on “Dead Guitars,” because I can’t think of anything else other than the band wrapping their hands carefully around the windpipes of the instrument and letting out little bursts of air. The strategy behind “Aug30” is equally obvious—have synth and static alike constantly faded into pregnant silence—but given the band’s ability to make a complete sonic environment, deliciously haunting.

It’s weird to think that “Aug30” is the only track with anything remotely resembling “warmth” on it, especially given that they left off with a kind of womb-like minimalism on CH-Vox (1996). There’s something incredibly harsh about Seefeel: not harsh like the apocalyptic strains of Tim Hecker or the ear-bleeding intensity of Yellow Swans, but cold, unwelcoming, indifferent even. In the messy zombie-pop/prog/noise of “Making” the band puts forward the suggestion that there might still be a place for that kind of response to music. I’m just not entirely sure where that is yet.