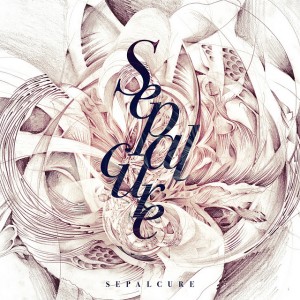 I’m willing to accept that in 2012 it’s almost impossible not to sound like an asshole when attempting to make a point about the colossal divide between the current visages of what is being more and more thoughtlessly referred to as dubstep. I personally find it less and less useful as an actual stylistic descriptor by the minute, but at the same time I’m sidled with heavy thoughts about whether or not the processes of generalization and the loss of specific character are always inherent or in the evolution of a sound, and, ultimately, whether they’re even worth thinking about. But still: the turn of the last calendar page certainly marks a convenient official jumping off point for a reappraisal of the dissipating genre’s identity, and I relish the opportunity to stand on something as solid as Sepalcure’s self-titled debut while attempting to do so. It’s going to make things a lot easier.

I have to say, though, that if I were in the respective shoes of either of Sepalcure’s two dudes—Travis Stewart, better known to us recently as electro-IDM breakout Machinedrum, or Praveen Sharma of Braille fame—I’d probably be sweating a little at the thought of some over-hyped, one-dimensional caricature of my sound getting all up in my business and telling tasteless jokes at everyone’s expense before I could even show up to the party—like some kind of embarrassingly unkempt pod person. These guys have remained as dry as the cut stone of the tombs from which they take their name, without a moment’s attention paid through the darkest hours of dubstep’s recent dissolution, and the confidence with which they put forth a striking amalgamation of everything about the genre that deserves to be remembered well is no less than a first class mummification, an artful preservation of a unique corpse. As monuments to something that will soon have no name, Sepalcure stand strong and weather the gales of the ravenous pop hurricane which would seek to engulf them without so much as flinching. The only real question is: do you believe in necromancy?

The simple answer is an overwhelming affirmation. Vitality virtually seeps from the pixelated pores of Sepalcure’s debut LP, one of the most successfully maximal, exuberant debuts I heard from the scene in the latter half of 2011. Sepalcure’s sound is a bit of a tightrope act that teeters between overt familiarity and mind-bending kitchen-sink singularity, and through that friendly dichotomy they become the perfect candidates for getting away with making dubstep in 2012 and not embarrassing us when we play their songs at parties while we tell tasteless jokes at everyone’s expense. The seamless blend of cutting-edge textures and an obvious deep respect for the essential building blocks of classic techno make Sepalcure a pretty resounding success that a lot of folks are going to find themselves too immersed in to worry much about which iTunes category to put it into.

The individual personalities at work within Sepalcure certainly reveal themselves unabashedly to those with even a glancing familiarity with the solo work of either Stewart or Sharma, and just about every ingredient can be checked off of the recognizable dubstep checklist: tumbling-bubble-pop-two-step rhythms, gleaming metallic pads which rise and fall like waves of fluorescent light, and a heaping dose of distant, gossamer vocal samples. It’s pretty clear what we’re working with here. But within that comfortable matrix, like talented architects of simple stone, wood, glass, and metal, Sepalcure use the basics to utterly striking effect. The key here is a restless layering, the songs realizing themselves almost three-dimensionally upward, as with a painting comprised of so many layers that it becomes almost irresistibly tactile. Most of Sepalcure’s contemporaries, and particularly Sharma himself, have made much of deeply patient minimalist excursions and a sort of tantric restraint, but when compared to Sepalcure’s sweet-tooth-jarring decadence, come out looking like a bag of M&Ms as measured up to a towering gourmet birthday cake.

So there it is. I feel like even considering the duo solely within the realm of their associations is something I should have obviously known to avoid. But it’s difficult. On the one hand, if wobble-bass and overdriven klaxons are currently soundtracking your most stomach-turning nightmares (thanks, Skrillex), I’ll be the first to offer that you’re not without grounds, and not remotely without sympathy. This boat has officially been hijacked. But conversely, if you’re starting to cringe a little at the thought of such pointless purist fervor, let me also be the first to acknowledge the dynamic of dissipating identity. Short of a sweeping generalization, I’m comfortable saying that most musical creativity comes as a result of a need to contribute to a sense of community or to communicate a unique vision. At that, it’s still hard for someone with an overt addiction to Dickensian floweriness and adversarial structure to further realize that when it comes to communicating ideas at all, the audience gets to decide the nature of what they’re experiencing on their own terms. And when they attempt to define that experience, they instinctively defer to a communal sense of understanding for the sake of convenience. It’s a natural part of the cycle of cultural evolution.

But the most important thing that Sepalcure help me to realize, as is necessary time and again with many sensible ideas, is that there isn’t much in a name. The important point is simply that there is always more to any story when it’s given its own due, and there can never be real understanding through convenient categorization. That fact seems now to follow just as well in the tragic case of this soot-blackened young lad called dubstep, and you know what? It’s fucking Dickensian, is what it is. A Tale of Two Dubsteps? OK, kill me. But whatever you do, offer yourself a favor and stop worrying about this kind of stuff. I could use some communal support.