Other Records by Shotgun and Jaybird 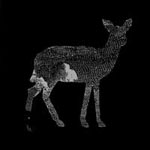 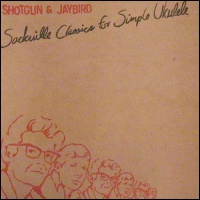 Not a whole lot is widely known about Canadian guitar/drum duo Shotgun & Jaybird. Amidst stories of starting the group in small-town Yukon in an attempt to drive the only other band out of town (which had, as the legend goes, given Jaybird the ol' boot), few "facts" are for certain.

"Fact:" The band did actually form in the desolate Great Canadian Northwest, and both members -- Dick Morello (Jaybird) and Shotgun Jimmie -- regularly trade drum/guitar/writing duties. "Fact:" They've recorded a couple of albums, including this one, which was recorded in Sackville, New Brunswick at a radio station (CHMA 106.9 FM). The other includes bassist Dom Lloyd, though I've yet to track that one down. You see, one of the most disappointing facts about Shotgun & Jaybird is that their records aren't easy to come by, even on the monstrous open market that is the internet. Don't ask me why, but in a country where Pilate can take off (awkward pun not intended), it's not due to a lack of talent.

Another "fact" about Shotgun & Jaybird: despite scoring a lucrative deal with "the Happy Happy Goodtimes Ukulele Company" to play their instruments exclusively, very few actually make it onto the record. So, yes, pretty much the entire thing is performed at a radio station with just guitar, drums, and two barely-in-tune, Stephen Malkmus-inspired singers.

But a loosely sung White Stripes, this ain't. If you were an indie teen that grew up on melodic lo-fi rock instead of ballsy metal riffs, and recorded yourself and an electric guitar with or without your friend drumming or fumbling along on bass, you've attempted something very much like Sackville Classics. Its structures are often short and repetitive, hinting at the kind of amateurish songwriting that I once proudly paraded around my room like I'd written the next "Broken Face"; however, Shotgun and Jaybird both have a knack, much akin to like-minded Canadian groups like Transistor Sound & Lighting Co. or the now defunct Inbreds, for a simple three-chord melody that supercedes their restrictive approaches.

Open "Kickdrum Blues" succinctly combines a couple of chords, obscure lyrics, a somewhat obnoxious lead singer, and a drummer with a three piece set-up and a fantastic case of ADD. "Lights Dim" and "Feverish Cabaret" keep the momentum going, despite the latter's few toss-off lyrics ("Just because I'm in love / Don't mean I broke my brain"). Likewise, the succinct "'04 Ed." is a stunningly accessible -- and, yes, simple -- ballad with brief female harmonies that more often than not sound great...just not much near the song's end. "Ed.," like the album's other under-two-minute three chorders "Lights Dim" and "Tim Belliveau" (which has a great Ted Leo/Arcade Fire groove to it, despite its bare arrangement), are just as convincing of the duo's talent as any of the longer cuts.

In "Coming Around's" five minutes, the band highlights pretty much every hindrance of their simple approach, yet they end up pulling it off anyway. The lyrics are melodramatic but vivid, and, in a way that 99.9% of "emo" bands still fail to understand, convincing. "JJ 2 Mom, I'm in Midgic" is another fantastic song, divulging into a series of melodic turns. As the record goes on, however, the songs start to lose momentum. "Railside Roadhouse" is the first real disappointment, and though it isn't a bad song, what does work about it ventures a little too far from what had made the core of the record so promising. Likewise for "Slowlane Driver," which stumbles out of the opening gate like "Feverish Cabaret" but doesn't hit back nearly as hard. "Can't Find My Picks" is the major exception here, and is easily one of the record's best; it incorporates a very subtle Smiths swagger, and its instrumental chorus is as notable as any vocal hook in the track's three minutes.

"Swimming" is practically a decent "'04 Ed." rerun, and the final, unlisted track, is a song performed by wandering ukuleles, and though it probably could have been cut by a few minutes (it lasts over four), it makes for a light-hearted and, strangely enough, soothing ending to the record. One can only imagine what heights these songs could reach with wider arrangements and a cleaner production, but it's also hard to tell how much would be lost; it's an excellent album as is, and like far better-known songwriters like Britt Daniel, a lot of their songs appeal comes from their simplicity. It takes a very crafty songwriter to pull off one song, let alone an album's worth, with just the bare essentials (and in one day at a radio station, if we're getting technical). Over a decade after Slanted + Enchanted (1992) and Crooked Rain (1994), it's still exciting to hear a band do it well.

For a completely unknown Canadian two-piece with less information circulating the internet than my great grandmother, Sackville Classics is a serious achievement, and one that should be reaching a far wider audience.