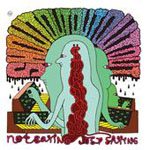 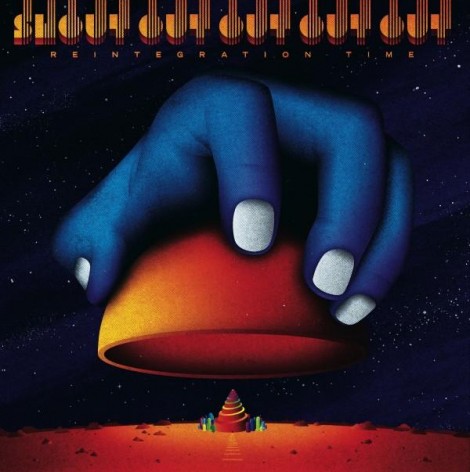 Would it be so inconceivable for a band predominantly known for its live show to simply not release an album? This is a question I keep returning to when listening to Shout Out Out Out Out’s interesting but frustratingly restrained Reintegration Time, follow-up to their breakout Not Saying/Just Saying (2006). SO4 have built their career around their energetic, engaging live performances, establishing a respectable reputation in their hometown of Edmonton and subsequently spreading ever outward. They’re now big enough to headline tours across the continent, packing shows pretty much wherever they go, and this impressive and consistently-rising career trajectory is pretty much just the direct result, as CMG alumni Connor Morris rightly noted in his review of the band’s debut, of good old word of mouth. Their debut suffered from unfavorable comparisons to the killer show that launched their careers, and they’re bound to face the same complaints the second time around—in other words, Reintegration Time‘s alright, but it’s no substitute for seeing these guys perform.

That’s how I was initially introduced to the group, and I’m sure I’m not alone. The band had played a massive outdoor music festival here in Ottawa, and friends who’d gone in without preconceptions had left sudden and unwavering Believers. “You need to see them live,” they’ll say to potential new converts, something in their voice always suggesting that this is meant as a preemptive rejoinder to whatever dismissive things you’re bound to say once you actually hear the damn thing. Calling SO4 a “live band” sounds at best defensive and at worst like a lame excuse, implying that their album must be shit. Reintegration Time is certainly not shit, but it does once again fail to capitalize on the band’s obvious talent. Very unfortunate, yes, and it puts me in kind of a weird position: I like Shout Out Out Out Out quite a bit, but this is neither a band profile nor a live review, and so I’m left dealing with what I’ve got. And what I’ve got ain’t great.

SO4 return with pretty much the same bag of tricks as their debut: upbeat electronic dance-rock in the vein of fellow Canadians Holy Fuck or early LCD Soundsystem, comprised almost entirely of chunky synths, prominent bass lines, and a whole fuckload of drums. As that formula might suggest, the main draw here is the band’s tight rhythm section, and though we’re not exactly talking Boredoms-level drumming, the percussion throughout Reintegration Time is plentiful and practically flawless. More doesn’t equal better, particularly in a genre rife with overproduction and stylistic excess—like a conspicuous (and often exaggerated) artificiality and coldness, which SO4’s organic approach works against—but this record’s liberal use of the band’s best trick rarely feels gratuitous.

The band’s always had a bit of a Krautrock bent, and on Reintegration Time that side’s been embraced whole-heartedly. It suits them well; the album’s strongest section, the back to back two-part “How Do I Maintain,” is essentially ten straight minutes of the band playing out their Kraftwerk and Neu! fantasies, like a condensed cover of LCD Soundsystem’s 45’33’‘ (2007). The extended suite is followed by the only song on the album that sounds like it ought to be a club single, the infectious “One Plus Two Plus Three,” fronted by guest vocalist San Serac. In general, though, SO4 are a band that sound best when focused on their own strengths—rhythm, tension, energy—instead of simply backgrounding guest vocalists. Serac mostly does a good job of staying out SO4’s way, but then you’ve got a track like “Coming Home” featuring Cadence Weapon, which threatens to completely derail the album with its totally obnoxious “We do acid!” refrain. It’s a mess, the one significant misstep on an otherwise reasonable and consistent record.

“Coming Home” aside, as with Not Saying/Just Saying it’s not the material itself that’s weak so much as the performance and presentation. Not to belabor the same point, but there was just no way Shout Out Out Out Out were going to be able to pull off successfully on record what they do so effortlessly and gracefully live. Which is why I keep coming back to that same question, conflicted, with a worry that we’ll always have to settle for merely decent records, like Reintegration Time, that can’t possibly do their reputation justice.