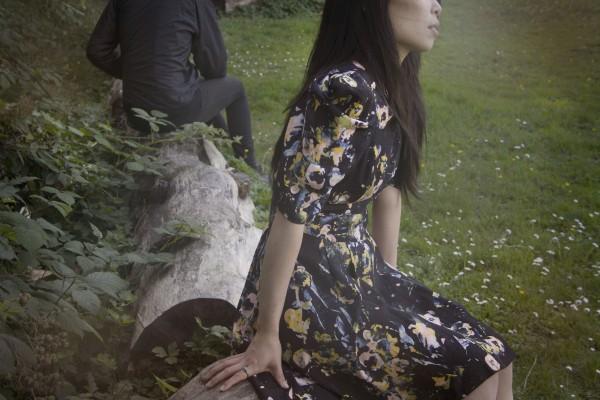 2010 was a good year for swans: Yellow Swans’ Going Places earned the noise duo some posthumous worship; Michael Gira’s Swans reformed for My Father Will Guide Me Up a Rope to the Sky; actual swans/mute cygnets celebrated nine centuries of royal protection; and newly-formed Silver Swans slowly floated to the top of the blog scene. Ann Yu’s and Jon Walters’ disco dream-pop was causing ripples beyond their native San Francisco, and it wasn’t long before the heavy-lidded couple found themselves courted by the man who broke the Drums. Both acts had a kind of bubblegum appeal—they could subdue the kids with waves of warm pop hooks, angst on standby for the verses—but while the Drums channeled Brian Wilson with stories of girls and volleyball, Silver Swans were more introspective, meaning they stood a slightly higher chance of making waves on the east.

Taking the words “bedroom pop” to heights only an employment lawyer would dream of, Yu and Walters recorded their debut EP in the small hours/under duvets/in the toilet. So when I say that the dreaminess on Secrets feels sincere, I mean it’s drowsy, semi-conscious, should-I-have-a-piss-or-not sincere. Yu exhales her 2am monologues while Walters pumps out tight keyboard sequencing, creating a kind of subconscious twee. And the Swan brand of twee is one everyone can enjoy: indie enough to appease the recluses, but with enough pop muscle to keep the undecided nodding.

One of those nodders must be Liz Harris, because the Swans have trained their wily eye on her blurred style as Grouper. Secrets is essentially Grouper’s Dragging a Dead Deer Up A Hill (2009) under a mirrorball, and once you make it past the breathy intro of the title, Yu confirms this herself, half-visible washes of light spinning off her. Her first song finds her being woken one night by an old flame’s drunk text, drowsy reactions smothering Walter’s keyboard swells like white throws draped over furniture. “Are you happy? / I know you shiver like stone,” she sighs, wondering what happened to her former fuck-buddy as the Scarface soundtrack freezes behind her. The recipe generates one hypnotizing break-up song, and it’s hard not to thrust to Yu’s cruel tongue while Water beats out half-remembered melodies.

This simple formula keeps the whole EP flowing, with some neat twists occurring later on. For a non-comedy record it’s one of the first to emulate the early nineties’ peace vibes seriously: “BF!”‘s stripped-down dance and hyperfunky bass could come straight from a German chart cassette, the lazy disco drop and prog house currents sharp enough to give old ravers flashbacks. If you did drugs fifteen to twenty years ago you might have crashed out to this track’s ancestor, awaking in the afternoon with the urge to drink soup, not talk to anyone, sleep, and press repeat. “Let Me Know How” is even more bouncily nostalgic, and reminds me so much of Candyflip’s “Redhills Road” I frantically read the song’s credits. Never heard of Candyflip, you say? No, nor have most people except a handful of ex-festival survivors, so either Waters and Yu are dream-pop grave robbers or they’re writing like they don’t know what year it is. My money’s on the latter, and I hope the kids who hear this stuff investigate many more hits from circa May 1991. They can then stun their parents with the new ones recorded here, proving simultaneously that a) not everything’s commercial and b) everything is cyclic.

Silver Swans escape the pure nostalgia label through an understated flair for experiments, making Secrets flightier than the well-trod checklist of most retro-electronica. Instead of old Yamaha effects and drum beats rescued from the CS-70M, the band incorporate more modern thinking into their songs, such as the operatic pulses on “Those Days” which show Yu’s full range and softness. OK, so the panpipe intro might grate a little at first, but by the time the note-perfect xylophone line opens up you’ll want to snuggle up and stay in bed forever. Even the cloning of “Twinkle, Twinkle, Little Star” on “Meet Me Somewhere Nice” is done subtly, its stylophone production soon eclipsed by pianos so fast they sound like guitar chords. This is the song for singletons at the end of the disco, and when Yu sings “I never meant to hurt you,” she means it (she must do—no one can lie while sounding that fatigued). The way she cries “Oh” implies she’s wishing there was a shortcut to cut these pesky emotions out forever. Sorry, Ann, I’ve tried it myself and all bromide does is eat your knee muscles and give you bronchitis. And anyway, the emotions harvested here are definitely worth experiencing. If Silver Swans had dropped Secrets in ’92 then they’d have at least one chart smash under their belt. As it is they’ll have to wait patiently on the stairs, then drag listeners up to the bedroom where they rule.