Other Records by Six Organs of Admittance 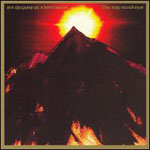 School of the Flower

The cursor is waiting. It’s blinking insistently, demanding words from me, an explanation of this album. And I’m horrified, because I don’t have them.

Here’s what critics do: listen to music, and then write about it. A mutation takes place somewhere in the critic’s head, and sounds are supposed to become words, feelings into analyses. Somewhere along the way, the critic thinks up a number, and attaches it to the top of the review. And that’s usually all people read. If the critic has done an extraordinarily compelling job, the reader may skim the last paragraph. Which is okay: for most critics, just writing is gratification enough. They don’t need the audience.

But in the case of School of the Flower (the seventh album from Six Organs of Admittance) the writing is the most arduous part. Because all I can truthfully say about this album is that it’s a gorgeous little nightmare, rain-swept and broken and lovely and flickering and dying. And that you, the reader, should get it, and listen to it immediately and repeatedly, until the bleeding ink and alien shapes become familiar, like an alphabet made of Rorschach tests. You, reader, and I, critic, are in this thing together, and if we can help each other make sense of this thing, then we both win. But I’m not holding out much hope for that to happen, which is why the most honest review of this album is also the most concise: “It’s really fucking good.” Other words fall short.

So what we’re up against is this: hissing, rattling guitars that glint like a knife in the sun, circling over one another as a juggler catches these daggers in slow motion. The distant murmur of feedback, hums, tape loops, and free-jazz drums draws our attention to the unimaginable behind the horizon. And so preoccupied are we with discerning what that monster slumbering beside the sun is, that when we look down we realize that knife has slid into our stomach. And then the knife retreats, and we look up, and we realize that we never even saw the juggler’s face.

Repeat. Eight times. This may seem formulaic (guitars, occasional vocals, ambient noise), and, yeah, from the outside looking in, School of the Flower can feel homogenous. But this album gathers severity on repeated listens: a pleasant guitar line and a cooing vocal turn mournful after a week of contemplation. The broken-hearted feedback mating call that closes “Home” turns from a squonking oddity to something universally baleful: a murmured argument from a floor below for you, an upturned car for me, wheels spinning idly. This album’s homogeneity is a smoke screen; what lies behind it is something too devastating to not be indecipherable (or vice versa).

None of which is anything entirely novel. Six Organs mastermind Ben Chasny’s output in this vein has been prolific, with five albums released since ’02, each utilizing the same sonic tools toward the same emotional effect. Haunted acoustic fumblings and four-track trickery are as old as Harry Smith’s epic field recordings and as current as Akron/Family.

But if School of the Flower was recorded in a field, it was a field scattered with melting clocks, ghosts of unthought ideas, and every part of the iceberg but the tip. Sometimes the album confounds the critic, and the transformation from sounds to words just doesn’t happen, and the reader is left with a million middling metaphors to skim. Sometimes an album hits a spot too far behind the consciousness. So if I can’t think of the right words to describe this record, don’t get frustrated. I’m not inept; the right words just don’t exist.