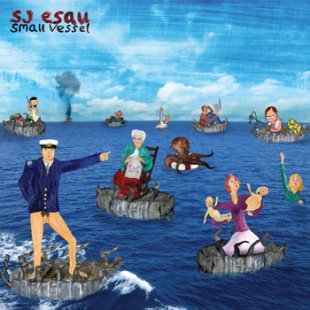 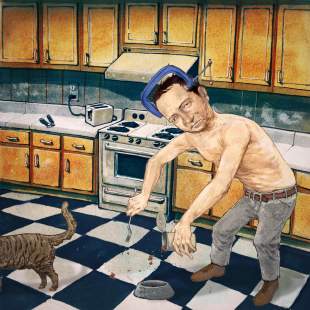 For his Anticon debut Wrong Faced Cat Feed Collapse SJ Esau is able to imagine a bleak mise en scene where some tired chump or chumpette blinks out bending to feed the cat and falls to the floor, dead, supine alongside the pots and pans cabinet. That's Esau's carte blanche: any number of terrible decisions could have lead to such a moment and such a boring, pathetic, maybe lonely death, none of which would resemble the daily acceptance of monotony. I mean, maybe Esau's pointing to the typical neuroses of a cat owner and calling out the obsessive, projecting crap, the picture mugs and endless reminders of feline antics and shameless fur-saturated wool sweaters...I'm a cat owner myself, and that means that I hate my cat and it hates me, enough for me to refer to it as genderless, an ancillary thing that depends on me and resents me simultaneously. Whatever Esau's representing with his cat metaphor -- even if he is just talking about his cats -- the symbol doesn't matter in the sinking throes of death, because keeling over in your loser kitchen onto your dusty floor and then shuffling off before you can witness your cat sprint for the food spilled out of your limp hand is a terrible way to go.

One way to figure out why SJ Esau is wrong-faced -- or why Sam Wisternoff, the guy behind the album, has created a set of songs about a person that's wrong-faced -- is to inspect his past; an admiral and unexciting past it is: He's a son of Bristol. He rapped when he was eight and was a third of the True Funk Posse, using drum machine programs, at his brother's behest, behind a ZX Spectrum. They made pre-pubescent hits. Later, he was in a noisy band teenage-wise, citing the Pixies, Husker-Du, and Sonic Youth as influences, and then eventually settled with his current moniker, releasing a number of EPs, the shoe-ish-gazer, self-released album Queezy Beliefs (1999), and band side-projects. He also signed to Anticon after working with Why?, after Yoni Wolf played Esau's demo over and over into inculcation on the tour bus and on internet radio, and after Esau barely acquainted himself with Why? at some show or another. Wisternoff's a guy that makes befuddling loops and pop songs in awkward dynamics, juicing the two to wring out any ounce of catharsis he can manage, propping the sullen rinds up on stilts. That's why "Cat Track" seems so easy. It has that candy formula of careful plucking into fuzzy wail, like in The Departed when a tense moment leaps into an exciting moment where Leonardo DiCaprio is probably brooding in the back of a speeding car, and the fucking Dropkick Murphys explode inside your retinas while they're growling over a fiddle. Just listen to the DVD menu. That could be the chorus on "Cat Track," and it could be my favorite song of the year, mostly because if I admit that I can begin to wean myself off it.

So, it comes to pass that Esau's biographical tale doesn't really have any verve or any healthy sense of danger; it's more just a hardworking, successful series of isolated, bedroom songs where some guy tries to let everyone listen to his gorgeous, pale-faced music (that sounds a bit like Leeds-type folk with psychedelic pustules) despite whatever disappointments flood his way. But I bet his parents haven't heard of Why? and can only politely nod when the subject's broached, and that's not an insult, because I'm sure Why? gets the same crap about Fog or maybe Dose when Dose walks in with that scandalous mohawk of his. When Anticon describes Wisternoff playing "anthems for the unsung and uneasy hero in each of us," I just think Wrong Faced is wholly pessimistic. A downer. A dreary ode to walking the line and dying short of expectations, peppered with feral bouts of madness. No, with enlightened moments of unadulterated anxiety.

So, "Cat Track," part envy, part just describing complacency wherever it may lurk, is an opener -- past the umpteenth noise chortled out of the insignificant first track -- about a housecat, "Fully fulfilled, he's got no balls / Spends every day...calm of breath / Found a new place to breathe in." The cat is satisfied with a meager environment, with the tinkling piano that pervades the opening and with the cheap loudness that defines the choruses, but in turn is weak, dependent, and without reproductive means. In "The Wrong Order" Esau continues his images of mundane environments, singing through his dry husk of a throat, "My hard-system's cluttered up / With typos and pointless stuff / ...a rhino smashed up my flat." A harmonica intones dynamics for the see-sawing bass, parses crackling backdrops into accessible mosaics. He says soon after, "Deception / In bits and pieces," and we understand immediately that the quotidian without bits and pieces could be unmanageable and maybe pointless because (anyway) daily patterns are difficult enough to bear without overstated highlights. In fact, everything about Wrong Faced Cat Feed Collapse is overstated, from the milquetoast politics to the dins of release splitting most of the songs into parts.

Esau's album could seem unoriginal because of its unabashed, fist-popping structure and its overtly middleclass angst, but it succeeds thoroughly on both accounts, heightening the tension in whatever ennui it alludes to, wrapping chemical malaise ("My thoughts turn to alcohol": I fucking love that turn of phrase) in synths and strings that endlessly build off one another. Through it all, Wisternoff's melodic timing is impeccable. He's always able to conquer the walls he builds, able to sit on the noise and bare the logic at hand. "Queezy Beliefs" is probably the best distillation of Esau's method, a sappy tar-thick mélange of multi-instrumentalist Max Milton's orchestral backing and Sam's gravelly, beanpole voice. And that organ drone's so fittingly gothic; suck it, Arcade Fire. This stuff's mopey but never amounts to a dirge. SJ Esau is too grand to be bitter, too misanthropic to be cheesy. Governed by impulse, shit's alive.

I probably know that pharmaceutical drugs can alter my personality. I'm scared of getting tied to addiction or laziness or dependency. I'm terrified of the future and of machines and of my unibrow slowly creeping into my eyeballs, even though I can deal with all three regularly. Wisternoff answers these complaints by quieting; still, interstitial tracks plain don't matter, or the goobered bounce of "All Agog" is killed (gimmick'd), and "Halfway Down the Pathway," a four-track wisp in saturated disguise, sounds too weak to get past that ugly, diced coda. Wrong Faced Cat Feed Collapse, then, sounds almost there, almost the future, and Esau's almost the most accessible scaredy-cat troubadour since Nick Drake. Too bad the floor sometimes gets in the way.