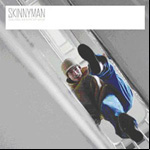 In 1982, Tim Roth starred in a made-for-TV movie called Made in Britain. Last year, the UK press’s answer to Eminem (he’s white!), SkinnyMan, cleared a plotline’s worth of samples from Britain to fashion a backbone for his debut LP, Council Estate of Mind. The samples follow Roth as Trevor, a teenage skinhead lectured by his social worker, pinned in bureaucracy, and fraught with the anger of living a council estate lifestyle. For such a long-awaited debut to carry such a significant working-class voice, it became no surprise that SkinnyMan was quickly heralded as a brilliant clock for the times, blunt and raw in all shades of accessibility. But Council Estate is too driven by BBC fuel, allowing Skinny’s vivid vernacular to take second string vitriol to Roth’s rage.

SkinnyMan’s flow is serrated and coffee-stained, predictable in long passages of end rhyme, but ultimately refreshing with nasal tones more witty than manic. The Eminem comparisons are mostly lazy, in that Skinny doesn’t carry the same whimsy, misogyny, or shallow schmuckiness as our own Detroiter does. The Leeds-born Londoner does build long verses around fattening couplets, akin to Slim’s once impressive structuring: in “Council Estate of Mind,” Skinny dishes an addled rant at the cycle of street life, devolving deeper into the estates themselves and, finally, into the minds of a generation of survivalists. His rhymes follow a similar descent by beginning in clipped phrases and eventually enjambing the lament down to the last canned cymbal crash.

And DJ Flip gives SkinnyMan’s vision enough to work with, tarring the line with a prickly bass, dropping into a shower of piano and then a wave of disco strings. Too bad, the dubiously inane beat that drags under the swollen arrangements characterizes much of the cadence and beatwork of the album itself. Cuts like “Day 2 Day Basis” and “Put in the Work” pretty up the same boring snare snap with gospel flourishes and wistful violins, with vibes and choral mistresses, with a restrained dash of funk, even, but all the gilded enthusiasm in studio production can’t hide the fact that Skinny raps the same pace and message through most of the massive tracklist; “I see so many trying to put in the work/ And get left in the dirt/ And now all they got left/ Is their pride and their hurt./ Trying to represent/ But that ain’t paying the rent./ Time is money, on the street is where my time is spent,” and so on, at about the same speed you’ll be reading this.

But SkinnyMan does succeed when he differs from vague institutional injustice by detailing the more precise obstacles of a council estate existence. Single “I’ll Be Surprised” chronicles one night in a vicious gang war. Baby J spikes the uniform percussion with a smart, staccato riff, and the Man unabashedly divulges himself in reggae call-and-anwer grooves. The image of street soldiers who "rape their own semen" is a harrowing one that grounds Skinny’s social woes in more visceral immediacy. “Fuck the Hook” could have been recorded live on American Bandstand. Skinny’s most confident mouthfuls amount to little more than typical nut flexing, but the simple devotion to hip-hop’s legacy and the awareness of the swollen lips of Forefathers-apparent in many an anachronistic beat and many a Golden Age radicalism-lends SkinnyMan a charm that floods an otherwise deconstructive, unexciting anger. Just try and not like Trevor the skinhead by the end of Estate.

“Council Estate of Mind” and hopeful “That’s What I’m Gonna Do” offer subtle conclusions on the persistence of a council estate mindset, but the “Little Man” duo truly manifests the cycle of oppression, miseducation, and survival inside Finsbury Park’s gates. Piecing together a shambling revolution of movie bytes, ‘round and ‘round, Skinny inches through heavy assonance, speeding up as the intensity of his story escalates; the repetition of “blood” becomes a name, liquid, and force, all thoroughly desperate. Which then sprints into a ragtime jangle and click-clack diction for “Love’s Gone From the Streets.” Its double tracked verses seem to hint at a more varied outfit than Skin can assemble at the moment.

Council Estate of Mind has been three years in the making, spinning through the collapse of label Talking Loud and Man’s nine months in prison for marijuana distribution. The Hype and stacks of excellent battle tapes attached to SkinnyMan and his Mud Family crew are prequel enough to the lofty execution of this album. Nine months later, cohesion is strangulation after being promised so much more. Prisons, gang life, prostitution: these are offered to us as blisters, not as root causes. Nine months later, the pot smoke still hasn’t cleared, and the Product hasn’t so much dissimilated from the manufacturer as blessed the big fat System with a refreshing mind to continually piss off.