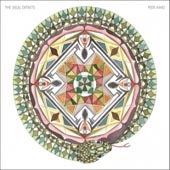 This stuff has the weight of histories behind it. Read any press kit, any review, and their examination becomes Talmudic in its complexity. Swedish group the Skull Defekts, whose music aligns beautifully in that uniquely Swedish manner of making post-punk, incorporates Lungfish alum Daniel Higgs to create a punk album that is, against all expectations, immediate, catchy, and unproblematic in ways that are both technically sound and aesthetically knowing. And yet the simplicity of the album is secondary to the fact that these particular individuals know how to make this a quality record. That Peer Amid is straightforwardly good is secondary to the other straightforwardly good bands it sounds like—like the Fall, and Wire, and Bauhaus— refracted through the lens of Swedish post-punk, goth, and new wave like Rymdimperiet and Cortex. This album is much more than a sum of its parts, which probably should be the case for any punk music made as late as 2011.

I get the sense, somehow, that not everyone can open an über-repetitive nine minute title-track with a croak and groan without sounding silly, but the Skull Defekts do it. You’ll read here, and elsewhere, about the band deserving the leeway to make an eight song record with a number of those songs running in excess of six minutes, but I want to emphasize that this isn’t a vanity project for the listener to humor and contend with. The band is self-aware enough to keep the arrangements frenetic but repetitive, the lyrics vaguely antagonistic but cerebral, and the production unadorned; but the accessibility of something like “No More Always,” or with as much personality as “Gospel of the Skull,” renders post-punk’s roadmap irrelevant.

The Skull Defekts also seem to know when to reign in a formula of diminishing returns. The hyperactive channel surfing of most punk music is here eschewed in favor of rumination on individual sounds, hypnotic repetition having more in common, perhaps, with ambient or noise than conventional rock. And like the best of those other genres, the album is finely scoped to just these eight complimentary, textural songs. The minor departure “The Silver River,” the drum circle “In Majestic Drag,” the aforementioned nigh-Beat Poetry of “Gospel of the Skull,” and the borderline confrontational noodling of “What Knives, What Birds” are combinatory in a way those of us listening to Swedish post-punk have become accustomed to. But they’re balanced elsewhere so that the package is a complete one. Peer Amid is a finely honed weapon, the product of a successful collaboration, and probably the best thing the band has ever done.