1. Mother the Sun Makes Me Cry
2. Belle of the Woodsman’s Autumn Ball
3. Egyptian Rosemarie
4. Clouds Through Sparrows Eyes
5. Tents Along the Wtaer
6. Careless Gardeners (Of Eden) / Sparrows of Eden (Eden Fading) / Drunken Gar
7. Come Down Off Your Mountain, Moses
8. Minotaur (Burn a Candle for Love)
9. Labyrinth Windows
10. The Supplication of Fireflies
11. A Child Adrift 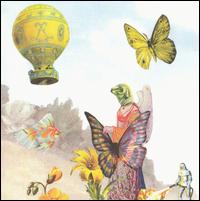 Life and Love in Sparrow's Meadow

After I got out of the shower, I was stunned when with a loud crack and a puff of smoke a four foot tall rabbit with a top hat appeared in my room. “Hello!” he said with a bow. “I am the Ambassador of the Skygreen Leopards, who have invited you to listen to their new album, Life and Love in Sparrow’s Meadow!”

For a moment I wasn’t concerned with the presence of the talking rabbit, or the absurdity of being invited by the band to listen to their new album. It was the name of the album that made me double take. “Wait, seriously?” I said, pulling on a sweatshirt. “They seriously named their album Life and Love in-”

“-in Sparrow’s Meadow!” the rabbit exclaimed with a twirl of his cane. “Come, follow!”

“Wow, okay,” I said, thunderstruck at the audacity of the album title. The rabbit tapped my wall with his cane, and a deep mahogany door appeared. But when he opened it, it led not into my bathroom (as the architecture of my house would necessitate it to), but into an autumnal forest that threw my squalorous living situation into sharp contrast. I stepped over a pile of filthy clothes and followed the rabbit as he pranced into the forest behind a childish guitar line.

Dead leaves crunched beneath our feet, skittering like maracas as something cooed in my ear, “Mother, the sun makes me cry.” A bird opened its mouth to sing, but all that came out was the throttled boing! of a Jew’s harp. I waited for the punch line, but it didn’t come: only more voices chanting that opening line in a woozily gorgeous cascade. The music sounded drenched in red wine and opium, and as we worked through the forest, the song soared only downward into the velvet swoon.

The “Belle of the Woodsman’s Autumn Ball” showed up; drunk, affable men drifted in and out of sleep on the sidelines, snoring like harmonicas, watching her dance by herself. She rode off on the train whistle chorus after pinning a letter to a tree: “If I could dance in a ballroom of glitter and shimmering tambourines. . .”

But the ink bled beneath the rainfall of “Egyptian Rosemarie," and we worked through the forest into a clearing, where on a grassy knoll the Leopards played beneath the flickering flames of the sun. Groups of hipsters laid passed out on the grass, some waking up and murmuring the opening lines of “Tents Along the Water” like the bleary-eyed bastard children of Agaetis Byrjun and Harvest. The rabbit was gone, and I was lost in the sea of smoke, pushing my way through the sleeping throngs to find a place to lie down. “Come Down Off Your Mountain, Moses” came as a shock, a Simon & Garfunkel guitar line wrenched from pop music’s cold dead hands and reset in that field, where it sat overgrown with moss, its eyes closing and opening imperceptibly.

“A Child Adrift” rolled awake after a minute or two, backup vocals and echoing strings just a widemouthed yawn before the whole album fell back asleep, curled up just like it was when the whole thing started. Some of the smoke cleared out; a few of the hipsters sat up on grass-stained jeans. The rabbit, from behind me, said, “Well?”

When it became obvious that I wasn’t going to respond, the rabbit grew impatient. “Well? Did you enjoy the Skygreen Leopards? Shall you return to the Sparrow’s Meadow?”

I looked at the drool falling from a sleeping hipster’s mouth. I wanted to wheel on the rabbit, tell him to go take a shower, then point at the band, motionless like some pothead Chuck E. Cheese animatronics at midnight, tell them to go shotgun a beer or something, wake the fuck up. I wanted to stand righteously like the punk I am, let them know that the world’s an awful place and they can’t just nap straight through it.

But the freak-folk fairy tale had only been going for a half hour. “Thanks for inviting me,” I said, stepping back through the mahogany door to my room, back to a stench more familiar and slightly less earthy. “I’ll give the album a good review, don’t worry.” And I closed the door.

I sat to write what had happened. The blinking cursor mocked my righteous fury at the music for being so unassailably gorgeous. All I could think of was an old saying, the type of cliché a college education is supposed to prevent. But I couldn’t think of anything else, so I typed it anyway.

“Sparrow’s Meadow: a nice place to visit, but I wouldn’t wanna live there.”

My editor refused to print it, and the album slipped through the cracks, an unheard oddity, an unopened door. What can I say? Some albums were meant to have a cult.