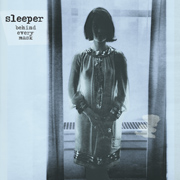 I’m not sure where this strangely anachronistic album is going but I sure as hell know where it’s been. Anachronistic because it sounds like DJ Shadow reverence couched in updated genre touchstones, like fatty synths and post-millennial paranoia; directionless because even those touchstones are coming late, and scratching at Sleeper’s stylistic surface reveals little underneath in the way of either excitement or a driving ken.

It’s all in the title, Behind Every Mask—which, along with the cover’s shadowed female figure dressed in decadent if gaudy ’50s-‘60s regalia, establishes the album’s rote complications. The aesthetic seeks out that Twin Peaks haunting of a suburban-rural space, a nebulous expanse making horrors possible, all of which is about as forehead-slappingly obvious at this point as an undergrad Beat essay. It’s no epiphany that reality is more complex than an ideal, be it suburban or otherwise. Unfortunately, and it has to be said, if the CD jacket’s photography is to be read literally it seems that the sleepily seedy underbelly to which the album is referring is women’s sexuality. Naked female forms are depicted half out-of-frame, perpetually shadowed, contrasted with scenes of domestic rooms, furniture, and a broad splay of keyboards and equipment, as if evidence of Sleeper’s credibility if not tendency toward fetishistic collecting; the CD itself is imprinted with a single breast, laced with twine. “Behind every mask,” it seems, are the phantasmal apparitions of women, foreboding and mysterious. And so Sleeper’s anachronism may in fact be more than stylistic. It’s as if the best defense one can muster is to suggest that the aesthetic was assembled with no prior planning, and that’s no defense at all.

“Condition or Effect” opens with a voice sample which states, “I think the drum machine was one of the worst inventions of the 20th Century,” before launching with immediate predictability into another of Sleeper’s drum machine-driven, mid-tempo slogs. Or “Faulty,” which provides a sample stating “It’s a mysterious looking box with a lot of colored buttons and switches and lights. It says on it: “Press Here.” So we’ll press here and we’ll see what happens.” A clicking noise, followed by more of the same hazy noise and big key washes over a few ramshackle beats. These uses of two-dimensional irony illustrate another assumption on Sleeper’s part to pull back the listener’s obfuscating curtain. Which turns out to be sort of funny, considering drum machines have entered and exited the musical lexicon, replaced by more dynamic and adaptable programs that synthesize their functions. If ever they did encounter discriminatory ears, drum machines have since been accepted and popularized. The notion of a band trying to make spaces for such revolutionary tools as drum machines, or any of the equipment they catalogue in their CD jacket, is one I hardly have time for. There are ideas far more deserving of acceptance in music.

I have no major issues with the music itself, though the album is too long and still under-explored, is less-than-intimate, less-than-exciting, and a faint ripple remaining after the barge of late-‘90s electronica passed by. What I take issue with is the suggestion of revelation. Sleeper are too often condescending to their audience; the style of both the music and artwork suggest a band standing on the forefront of something, though anyone who’s listened to music like this will know how terribly obsolete these formulas are. The starting point should never have been to create something lasting and relevant, because that space is reserved for who benefit from being in the right place and the right time and are smart enough to know when and how hard to push. The starting point for a band like Sleeper should have been to push the ideas to spaces independent of the equipment that is being used, of album artwork, and certainly without thoughts given to whatever type of audience could see this kind of effort as revelatory. Pulling back the curtain of their own assumptions and songwriting mores might have been far more enlightening and worthwhile, for performer and listener alike.