1. Bed of Nails
2. The Pros of Being a Con Artist
3. Laugh About it Later
4. Heat/Humidity
5. These Things Happen
6. We Panic in a Pew
7. When We Were Machines
8. A State Without a Springfield
09. Seriously, Now
10. Windows Facing Walls 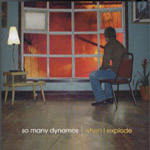 Seems that even in Missouri and Illinois that the D-Plan are missed. Desperately missed, even. So what to do? Well, apparently pick up a palindrome (didn’t notice that, now didja!), start a band under the moniker and party like it’s 1999. Not like, to that Prince song, but to like, that awesome Emergency and I record. And pick up the D-Plan’s mixing guy, too - you know, get as close to the well of inspiration as possible.

So what I’m trying to say are the two words, “carbon” and “copy,” without actually saying them. You know me --- if some doucheband is going to rip off one of my favorite artists (see: Razorlight), I’m more than happy to rip them a new one. But part of me can’t help but grant that of all the bands to rip off, the D-Plan is of the rarest and most difficult victims. That is to say, to sound so much like the D-Plan requires a hell of a lot of skill. And no matter how shameless the rehash, it’s bound to be pleasurable.

But on the other hand, I can’t really call SMD a pure carbon-copy of The D-Plan because there are these little things called differences between the two. It’s the unfortunate (and somewhat inevitable) lot of this band that the edge always goes to their inspiration. The biggest immediately noticeable difference is between Morrison and SMD front-man Ryan Ballew’s vocals and lyrics. Ballew does his best with his vocal lines and poetics, but he sounds like a teen version of Morrison trying to convince you of his alienation, whereas Morrison’s articulation of his emotional alienation sounded like it was backed up with years of unhappy experience. And while Morrison’s vocal style wasn’t operatic, he could certainly hit notes --- something which gives Ballew noticeably more trouble.

If this kind of comparison seems unfair, just look at SMD’s lyric book; it reads like a slightly less mature sketchbook of the D-Plan’s lyrical themes --- except the album is five years younger than Emergency and I. “Let’s Laugh About it Later,” populated by lines like “I know living in the city will do that to you,” pales against the crippling loneliness of Emergency’s “The City.” “When We Were Machines” spouts lyrics about the mechanizing of human spirit that can’t compare to those of Emergency’s “Memory Machine.” At the same time as Ballew fails to hit literal musical notes with his nasal emo voice, he also can’t hit the same emotional notes as Morrison, largely as a function of his more limited imagery and poetic palette. Ballew’s lyrics aren’t terrible --- they are in fact, better than most, with wry one-liners like, “If anyone calls just tell them we’re dead,” and “Drag your skeletons from the closet / And bury them under the driveway.” But when you sound so close to The Dismemberment Plan, you’re going to invite invariably unflattering comparisons. Against an album as lyrically brilliant as Emergency and I, there’s no way you’re not going to be fucked.

Instrumentation-wise, however, the group is usually dead-on, and, imitation aside, can actually hold a candle to the D-Plans spastic rhythms and sonic angst. Clayton Kunstel’s drumming doesn’t have the same lethal rhythmic variation and pacing that drove the D-Plan, but his sense of tension - especially well-communicated via his fill-work - is excellent. The band’s hooks are certainly effective as well; the melodic chord progressions that comprise their catchy figures on “Let’s Laugh About it Later” are certainly D-Plan reminiscent, but plenty competent. The Moog-work throughout --- “We Panic in a Pew” sticks out as the best example --- solidly captures the D-Plan’s eclectic pop tendencies. The group’s spaz-outs ---probably best exemplified by “Bed of Nails” --- are good and organic, even if they cement SMD’s indebtedness to the Plan. But best of all is the group’s sense of dynamic, which leads them through often-breathless dives and ascents through their pop structures. Plus, they hit on some moments of pure and unadulterated beauty on songs like “Seriously, Now,” which has one of the single most gripping and transcendent guitar melodies I’ve recently heard.

It’s tempting to say that if only the D-Plan didn’t exist, SMD would be the new harbingers of great pop. But it’s difficult to see how this record could’ve even existed without bands like the D-Plan to inspire it. Thankfully, when it’s executed this well, there ought not to be too much finger-wagging. After all, of all the bands I wish would be inspiration to today’s newer acts, there seem to be few worthier ones than The Dismemberment Plan and their fellow pop cohorts. And despite their imitation-as-flattery tendencies, So Many Dynamos do their inspiration some well-deserved justice.