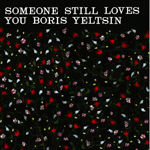 Someone Still Loves You Boris Yeltsin

Never underestimating the power of pop music is one of those first lessons we’re all supposed to learn as we make our way through The White Album, Pet Sounds, Radio City, Murmur, all the way up through Oh, Inverted World. These are the big names, but there are thousands more albums — millions of pop songs -- that click for whatever reason and just make things however much better. Go back and listen to Beulah’s “Gravity’s Bringing us Down,” the dB’s “Big Brown Eyes,” the Go! Team’s “Ladyflash” or Blur’s “Star Shaped.” These are songs that work on so many levels -- be it through undeniable hooks, pure youthful energy and excitement, or love-struck honesty.

I have absolutely no idea how to make one of these sorts of songs work, which is why I write about them rather than actively participating (that and the lack of any natural musical talent). Still, spend six or seven years honing an ear and you start to be able to gauge when someone’s doing it right. Which is why I’m pretty excited about this little band out of Missouri, Someone Still Loves You Boris Yeltsin (henceforth and forever more to be abbreviated as SSLYBY). They aren’t doing anything revolutionary, but they’re crafting great little pop songs with plenty of hooks, character, and ambition.

SSLYBY’s debut record, Broom, makes me wish (even more than usual) that Elephant 6 was still a presence. Broom fits comfortably next to the likes of Handsome Western States and even Fun Trick Noisemaker: not a truly great record or an entirely cohesive OTC-type affair, but nonetheless a terrifically enthusiastic lo-fi debut and a sort of throwback to a better era of pop.

The band establishes what they’re up to with an impressive one-two opening. “Pangea” plays off a breezy, sharp electric guitar lead and bubbly bass line, building through a simple pop structure (complete with killer breakdown at about 1:46) to a cry of, “Pangea / we used to be together / why’d we have to drift apart?” The follow-up, “I am Warm & Powerful,” plays it more ambitious, abandoning the original time signature at the 1:14 mark, morphing from a gloomy lament to straight up sugar-candy pop with the sort of perfect self-effacing lyrics to play against the music just right.

Singer/songwriters Philip Dickey and John Cardwell have managed to perfect their romantic croons and both have a solid understanding of the importance of a strong background vocal. The understated interplay of vocal parts on “Oregon Girl” saves an otherwise underwritten song, while the complex interchange throughout “Yr Broom” throws it over the top. While the rest of the band, particularly lead guitarist Will Knauer, often summon up some interesting arrangements, it’s Dickey and Cardwell that really manage to make the songs work.

And overwhelming, they do work. While “What’ll We Do” sounds dangerously like a The Coast is Never Clear b-side, the band manages to pull off the piano-guitar interplay quite well. The gorgeous “House Fire,” quite possibly the album’s finest moment, seems them moping along to a simple enough snare line that refuses to explode in the way that “I am Warm & Powerful” did. The lyrics of, “we did what we could / to save this car from crashing / your pretty face soaked in blood / you know I still find you dashing / airbag suffocates you / need a little space / rain on the windshield as I watch you limp away,” seems like the perfect companion to Chad VanGaalen’s amazing car-crash love song “1000 Pound Eyelids.”

The closing trio finishes the album off quite well. Knauer’s staccato guitar line serves as a backbone for the swirling “Anna Lee,” while “Anne Elephant” takes on the production chops of an M. Ward track, letting the handclaps and heavy guitar line play through. “Gwyneth” sees the band dabbling with a light piano line that comes through despite the hazy production and closes the album on a pleasantly downcast note.

There is no reinvention of wheels on Broom, but that’s really not the point, anyways. SSLYBY make good pop songs. May not seem like a whole lot, but, judging by how few really great pop tunes we’ve seen this year, a lot harder than it seems. Having ten in one bundle shouldn’t be taken lightly.