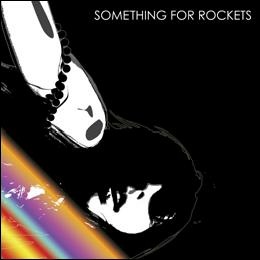 I don’t know if you can relate, but I’ve been feeling terribly un-sexy as of late. Overlook this casual rhyme, and check out my hair, no longer mama-can-run-her-hands-through-it playful. My fingernails need a trimming, I can’t dance, and my wardrobe has about as much snap as a fingerless infant. What I need is some help.

What’s this? Something for Rockets? More like a Prescription for Hottness! Even lead singer Rami Perlman offers a delicious anecdote, quoted in an April L.A. Daily News:“If you have a case of rockets, which is usually a feeling of total un-sexiness and unwillingness to have a good time, then you need something for rockets, right?” I Heard It First on MTV, Something for Rockets is an electronic space-funk three-piece that inspires spontaneous dance parties and compulsions to gyrate to college radio. Here’s my answer: my new teacher in the swoon of a Los Angeles club crawl, a #1 pick on Insound, a band that sings about doing it loudly and doing it anonymously, both very sexy things.

But something‘s not fitting. “Dancefloor” is a comatose plea to hit the normally raunchy epicenter of shiny mutual masturbation. Josh Eichenbaum’s programming seems sincere enough, a slippery snare trip with tip-toeing static, but it doesn’t push much harder than that. Perlman’s romantic guitar dips and goes lovey dovey at all the most charming words, but those words are boring and more creepy than alluring; carried in a monotonous and multi-track spanning sameness, “’floor’s” vocal melody snoozes through more than one lost opportunity for sexiness. In fact, most of SFR's lyrics are ugly and bland, stooped in too much confessional and unapologetic hedonism to save an imagination for Perlman’s ultimate aural sex elixir.

“Might as Well,” the album’s first single, picks up off of a simple and bouncy piano line with vibes snorting pixie dust and moogs coming down from a particularly revelatory hallucination. The song is pleasant and works in a very shallow song structure, but by the time “Tragic City’s” drunken rhythm ducks under a lazy riff, “Might as Well’s” initial impression of smooth and synth-full pop is easily forgotten and, moreso, woozily familiar. Subtle string samples make for interesting filler and Rami’s falsetto jump will most definitely find volunteers to “be [his] lady for free,” but then, out of the shuffle a --- as the decidedly sexy Aaron Newell has deemed --- “Xtina-sounding-backup-vocal to boot” is spawned. The songstress just feels awkward and her charm forced. Like a nun selling dildos.

“The Line,” meanwhile, is the closest we’ll get to a glimmer of hope. Under the guise of an ostensibly sludgy beat, Perlman’s cadence is engaging and clear, but, once again, one song later, the medicine runs dry; “Everybody Loves a Lot” may wiggle neatly through broken dish swirls, but the reemergence of Ex-tina alongside Barry Davis’s dub drum hits wields the kind of mediocre soul not begrudgingly tolerated since the Killers. Like Ms. Aguilera’s “Dirty,” this is anything but.

Speaking of soul, Something for Rockets doesn’t seem to have any. Get a load of the repeated initials “SFR!” in, not one, but two tracks: “Red in the Face” (which disastrously applies a one-night stand to a business transaction, “In conversation we / Became a bedroom team.” Maybe it would work if Perlman had even a hint of irony in his voice, but he seems satisfied only hinting at “bedroom team” as a euphemism for “screwing tonight.”) drags out the obligatory choir of wet tee-shirts, and “Take it Slow” yammers on about going to SFR or something equally nonsensical. Even self-referential Junior Senior can be bearable behind enough wit and lollipop highs, but SFR just comes across pompous and seriously out of their element. And while we’re at it, “Interlude” sounds like a rejected skit from a Ja Rule album and “Might as Well - Reprise” has no reason to exist.

For the wank-teenth time, the Mighty Hype Machine has offered its ADD to another group of feel good darlings that sound pretty cool but never last. But let’s not hold this against them; I mean, Perlman’s dad is Itzhak of violin virtuosity fame, and that’s sanctimonious, right? Well, besides a smattering of truly worthwhile moments, like “The Line’s” chorus and “Take it Slow’s” buried strings --- OK, two moments ---, Something for Rockets stinks, its acrid odor of empty love comparable to Rami’s loins after an especially exhausting practice with the bedroom team.

There is nothing sexy here. Nothing seductive about their hackneyed lyrics. Nothing intricate in their movements. Nothing worth recommending in their humdrum guitars and listless blips to anybody with a healthy libido. Really, William Shatner’s new album has more lust in its first five minutes than in all of SFR’s stilted harmonies. All in all, I really have nothing against unabashed sleaziness and all sorts of friction. Something for Rockets, though, are sluts in erotically transcendental clothes, and that’s just too fake to bear. Sure, dance parties are fun and all, but I’d rather be able to respect myself in the morning.