1. Don’t Take My Sunshine Away 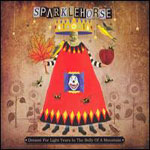 Dreamt for Lightyears in the Belly of a Mountain

Whenever I sense something gravely uneasy with the world or pick up a disturbance in the grand matrix of life, there are only a few souls to whom I can turn for support and understanding. Among these limited friends and confidants, a memorable Round Table of three comes barging out of the Halls of Nostalgia. Listed in order, which shall make sense soon enough: one reminds me of my vulnerable humanity. Another recalls my incessant dominance over Mother Nature. And a third reiterates my eternal gullibility. They are those I trust most on this earth, and they satisfy my dual needs of iconography and of plagiarism. Which is pretty convenient.

Recently, I‘ve had use for advice. Mark Linkous, the man behind Sparklehorse, has released a new album, his first since It‘s A Wonderful Life (2001), and it’s got a long, heavy title. Vaguely aware of Sparklehorse’s reputation, the initial sign to Capitol and the work with Tom Waits, and doubly aware of how stupid I knew the band name to be, I mustered a listen to Linkous’s fourth LP. Was this the Hypedequus I’ve read so much about, the Glimmersteed I’ve collected from mass critical consciousness? Confused and concerned, I sought the opinions of others.

Frankly, I wanted to believe the praise surrounding the Sparklehorse oeuvre. I wanted to be sodden with falsity. Yet, when approaching the previously mentioned cadre of brothers, the Round Table of three, I discovered how hesitantly the subject was broached. The story goes something like this.

I went to my robot, I said, “Robot please,
What do you do when your true love leaves?”
He said, The hardest thing in the world to do
Is pretend to like sum’en sounds like poo.

And then he continued, Even with my cold, metal heart telling me over and over about the importance of precision and the deftness of structure in all things, the walls of my “blood”-chamber have been rusted by this music. I do not understand human emotion, and cannot cry or fill with sorrow, or attempt to sympathize with any pain, but I do understand lubrication. Master Linkous lathers each individually wrapped unit of song with enough lube to choke a female robot.

Still, my jargon beseeches me: the socket is greased, but it’s got no balls. “Ghost In The Sky” reeks of gum decay, a fury of screeching guitars with no fundamental aim. The vocal is overprocessed, subdued as a matter of tone. This is no punk, no grunge rebate, no lo-fi anomaly. Therefore, logic recommends this song as an aberration of reality, so full of weak imagery and cliché, so contradictorily repetitive that it cannot prove its own existence. Similarly, “It’s Not So Hard” follows identical production knowhow, piling mounds of flat drums on top of a cornered electric guitar and Linkous’s once more muffled words. He is unable to stay in tune, and his voice does not possess enough characteristics of density or pitch or guttural to become entirely tolerable. Mathematically, his vocal lines are boring.

Inevitably, most of the studio design on each song is greedy and belabored. Everything is in its right place, but everything is too obvious or too proportionally gaudy to warrant more than a signatory “lo-fi” moniker. Of course, in laymen’s terms, my programs dictate that I find harmony in carefully executed details. This means that I am--metaphorically--fascinated with human fecal matter, not for its wastefulness, but for its representation of yet another marvelous human edifice. Perhaps you should talk to the bear in the forest. She would clarify much of Mark Linkous’s obsessive sylvan imagery and trouble with organic roots in automatic, customized music. She probably knows more about fertilizer. Soon after, I hit the robot in the snout with a rolled up newspaper for attempting poetic flourishing in a music review. I left to track down the bear.

So I went to the bear, I said, “Mama, please,
What do you do when your true love leaves?
She said, The hardest fight in this world of ours,
Is pretending some dude’s got magic powers.

She took a bite out of a fresh salmon, because she was standing by a river, and she continued, I’ve been a fan of Sparklehorse, and of Mark Linkous, for a long time. I find his time between albums a fantastic result of artistic growth and plodding grace. It’s A Wonderful Life, that was interesting, at least, a heady control of both folk ingredients and wizardry. Normally, I don’t trust the black arts, but I guess I could admire Linkous knowing his way around a machine. Even in times of severe bloops and whizzles, the guy could enact an organic calm.

But this new one, with the infernal name? Every moment before the calm, every tiny glimpse of subtle meat and potatoes, salt-of-the-earth roots rock or singer-songwriter humility is marred and mangled by an oppressive producer’s presence. Oh yeah, and where‘s Tom Waits in “Morning Hollow,” huh? That tune’s some glacial milquetoast, spare chords, weeping synths and all. Not to mention the title track, the last one, where Danger Mouse’s looping prowess is reduced to an annoying model of pause-and-plus craftsmanship. It’s infuriating, and nothing really happens. Excuse me, but fuck those useless violins. What assembly line did they come off of? …Are you kidding me? Is that him snoring?!? In her heaving of vitriol, she approached me, and we battled. The match lasted all night and most of the next day, but I managed to subdue the unruly beast.

Disgruntled at such a waste of time, but feeling marginally validated for sticking with my gut instinct, I found myself in a desert wasteland, somewhere at the fringes of our uncharted planet, and ended up fasting for something like forty days, or thereabouts. On the forty-first day, Satan walked up behind me

“You totally surprised me,” I said,
And he said, Yeah, I know.
I was all, “That’s fine,”
But he said No, I’m usually better about things like this.

He continued, Upon this, the final leg of thy journey, thou will be tested. I will offer thou three temptations, events that will try the very resolve of thy faith. In what? In thy educated opinions. I considered his words, and suddenly we appeared at the edge of a vast chasm. I was frightened, and almost stumbled.

I just wanted to be up front with thou about everything, he said. Doest thou want to rid thy peers of the new Sparklehorse LP, so that thy fellows will never be burdened by the same guilt thou feelst as thou doubt thine own intuition? If so, simply cast thy body into the pit, and thou will obtain full control over Mark Linkous and Mark Linkous’s career.

That sounded pretty nice, and even though I had a pretty decent idea of what was coming, I jumped in.

I fell and fell, and Beelzebub’s cackles rang overhead, and eventually the darkness loomed opaquely all around me. With no discernible light, no tactile rushes of air, no sound, I eventually felt sedentary, because that’s just how bottomless pits are. Amongst the mediocrity of death, I contemplated the fate of humanity since Dreamt For Light Years In The Belly Of A Mountain ceased to exist. Would there be a Dreamt-For-Light-Years-In-The-Belly-Of-A-Mountain-sized hole in the hearts of Man? No, I concluded, there wouldn’t. Sparklehorse’s fourth album is too faceless, too dependent on pictures of trees and shiny stars, to affect much of anything. Fans would have stayed fans, or would’ve just become passively disappointed in the meager consolidation of sound. The horizon would have stayed unchanged.

I had a long while to think, and realized my sacrifice was useless. Even the female vocals were lorded over so meticulously, treated like too sacred vessels, that they became tired. Every crusted orifice stank with boredom. Boredom leaked all over the place. I’d have to mop it up if I weren’t doomed to an equally boring plummet down an infinite gorge. Such a goddamned snooze.

The Devil had won, after only one temptation, and my trust was squandered. So that’s that.

With a bit less hyperbole, that’s the story of the new Sparklehorse album.