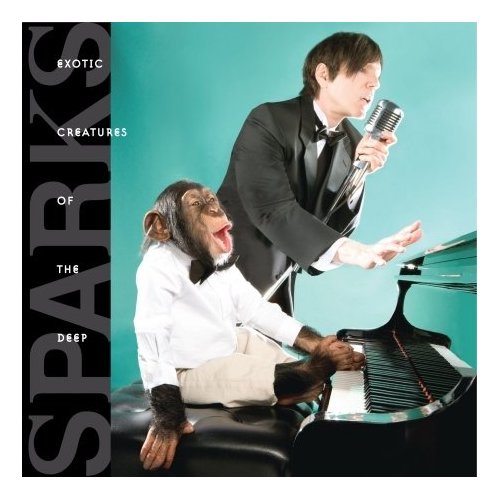 Exotic Creatures of the Deep

I refuse to believe Sparks are from Los Angeles, an area of the world renowned for its vapidity, shallowness, and air-headedness. The evidence all points to the contrary: the debt to Gilbert & Sullivan, the playful surrealism, the irony, the wordplay, and, most of all, the humor. No one does funny quite like Sparks. Admittedly, you can giggle at Ween and if you’re thirteen you may get some kicks from Weird Al Yankovic, but Sparks-humor is a horse of very different tooth. They have no fear of throwing in archaic reference points or outlandish situations; it’s a given that the listener will understand. There are very few albums that freewheel from a fugue about the revelry of the Renaissance “Gutenberg is cranking out the Bible with a centerfold” to the loneliness of unwanted male pregnancy in the style of The Nightmare Before Christmas “A wham and bam and thank you sir is all that I would get from her.” This isn’t smut and fart jokes. This is the Dead Parrot Sketch to glam guitars. Woody Allen as a mini-operetta. Talking of which, nothing smacks of Woody as much as “The Director Never Yelled ‘Cut’,” the intimate thoughts of a man being guided through sex like a film director “Got to stay in character, for how long I can’t tell you / And I feel we’re getting closer, though no indication yet.”

Of course, this isn’t surprising having been presented with odes to moustaches, Scheherazade, and in 2006’s “(Baby, Baby) Can I Invade Your Country?” easily the best commentary on post-9/11 US foreign policy ever put to record. But Sparks rarely venture too far from the bedroom and it is a topic that despite their occasional lyrical deviations has remained a constant source of inspiration. Despite dancing around the beast of two backs for decades, they still manage to illuminate, amuse, and present a refreshing take on this most exhausted of muses. “Good Morning” is typical of their atypical approach—a tale of the morning after and the discovery of a stranger in your bed. Against off-beat piano crotchets, Russell regales us with the paranoia inside his head “You woke up, got dressed up, hair messed up / while I fix you breakfast / I hope it’s just your laugh that is infectious,” whilst still finding time to thank God for his good luck “Gratitude for having thought of me / I know your time is tight.”

Fans of Hello Young Lovers (2006) and Lil’ Beethoven (2002) will be happy to hear Ron’s staccato piano treatments and synthesized string arrangements are very much in place, as are the cavalcade of looped, multi-tracked, and harmonizing Russells. Exotic Creatures Of The Deep, however, sees a return to standard songwriting as opposed to the riff collages that typified their last two releases. There are still smears of Reich, Stravinsky’s late neo-classicism, and Cole Porter’s lyrical deftness but there’s room for the electro-glam shock of “I Can’t Believe You Would Fall For All The Crap In This Song,” and on “Strange Animal” there are episodic blasts to their thumping pomp rock roots. Only epic closer “Likeable” recalls their previous two albums: Russell returns to speak-singing about his good fortune through the verses but lets loose as the choruses pinball between folk, rock, and fairground music, mopping up the block harmonies that made up “Intro” and “Intro Reprise.” It’s an impressive piece of music which, like “This Is The Renaissance,” uses contrapuntal composition to reframe melodic phrases against different colours, wringing from it every possible meaning. Also, in using the recall of the “Intro” and “Intro Reprise,” they act as signposts adding form and structure within the song and inadvertently to the album—as soon as the song ends with the block harmony you feel compelled to play the album from the start.

Of course, the track that is causing the most discussion is the fantastically titled “Lighten Up, Morrissey”—which, despite being about a comedic situation (Russell’s girlfriend won’t put out because he can never match up to Mozz’s standards), still manages to take a sly dig at Morrissey’s persona (“She won’t do sport, she’s says it’s way too masculine, look at him”) and the fanaticism of his fanbase. The real butt of the joke may be debatable; even though Russell is singing “She won’t hang out with me ‘til my biting wit, bites like his,” to the catchiest of glam rock riffs, you can’t help but think Morrissey has failed to produce a song that is as pointed or memorable in years. It must be a little bit of a double edge sword for Morrissey to be name checked by his heroes—as an early champion of Sparks, he wrote the NME to demand they be interviewed when they released Kimono My House in 1974.

Exotic Creatures Of The Deep is definitely the most accessible of their later day incarnation. While still having some challenging flights of fancy (the gargantuan “Likeable” and the genre-hopping “Strange Animal”) nothing is as esoteric or conceptual as the baroque church organ runs of “As I Sit Down to Play The Organ At The Notre Dame Cathedral” from Hello, Young Lovers or the dramatic overture of “The Rhythm Thief” from Lil’ Beethoven (“Oh no! Where did the groove go?”). However, where these absences would have made their previous albums feel slight, on Exotic this would have misjudged the tone completely. Exotic is witty, literate, and charming. Maybe that’s why we love Sparks so much in the UK, so much so that they are currently performing all of their albums on consecutive nights in London to a hero’s welcome. It’s patently obvious, Sparks are simply the best British band we never had.