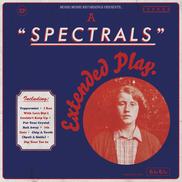 Sometimes the reference points are easy and that’s just fine. Spectrals, a one-man band from the UK led by Louis Jones, pretty blatantly explores a handful of sounds: early sixties pop and accompanying Phil Spector production; the tropes of fifties pop as appropriated by David Lynch; surf rock; the dense productions and simple songwriting coming out of New Jersey on Underwater Peoples (who happen to be releasing this EP in the US). What’s more, it comes on far better than it ought to. Unlike everyone else flirting with this basic palette, Jones does away with noise entirely while leaving the reverb and the heavy sense of atmosphere intact, which instead puts his strong production and ear for good chord progressions at the forefront.

The EP wastes no time in making this clear. “Dip Your Toe In” is all of two and a half minutes long and immediately gets its reverb-soaked vocals, acoustic and electric guitars, and warm, tom-heavy percussion in and out. It almost moves too quickly. Which is why “Chip a Tooth (Spoil a Smile)” is a better song: it’s shorter, but slower, and uses the 6/8 time signature pretty damn well. Jones’ melodies, for both his voice and the organ underneath it, and especially for the multitracked vocals in the chorus, quickly get to the hook that justifies the song’s existence—the one that carries the line “I can force a smile, but my mouth’s not really in it”—and then ends. There’s not much to say about most of these songs because they mine only a few ideas, but in such concise and effective packages it’s hard to call this a bad thing.

Surprisingly, though, it’s the longer songs where Jones’ approach to pop works best, hitting the same essential pleasure centers that the Clientele, among others, can consistently aim for and gut-punch. “Put Your Crystal Ball Away” doesn’t have much for hooks, just a certain English laziness to it, yet layered guitars, reverb, and a simple ride-snare beat turns it into a whole lot of textures utterly enjoyable to get lost within (which isn’t really, normally, what one wants from a four minute pop song, but perhaps that’s at least part of the draw here). If anything indicates that Jones has potential for longevity, it’s “I Ran With Love But Couldn’t Keep Up,” which communicates its title effortlessly, and again works within a simple pop structure but gets by far more on sounds than on songwriting.

All of this, then, comes down to an EP of material that does a few things: it makes me more than a little bit excited to hear Spectrals’ first album (supposedly titled Bad Penny, perhaps inexplicably after the Big Black song, and set for release somewhere early next year) and it proves that there’s still more than a few ways to make otherwise culturally bankrupt revivalism interesting. Jones clearly has a distinct production style and a way to make it hold up even his weak songs, as well as a grasp as to how to make very conventional instrumentation texturally engaging in the wake of countless bands that consider slowing down two samples, sidechaining digital percussion, and singing over the combination to be making novel and engaging music.