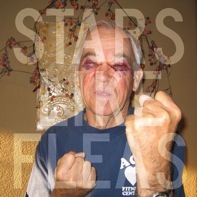 New York live splashes and thick fucking band Stars Like Fleas have released their third album, the first, so we’ve been told, to properly translate their divisive stage mythos to tape. On the surface or inside a vacuum The Ken Burns Effect is a pretty good, maundering LP that defines breadth in a devoted bodycount and coaches mind-blowing climaxes through counter-intuitive, sparsely melodic suites by harmonizing the fuck out of any vocal line not already punched in the throat by sonic glut. Of course, the buttery, rousing moments of the album are nowhere near as violent as I’ve described, but the intent is still merciless enough: Stars Like Fleas makes slow, near-ambient pop that exists solely to point the way for apexes of traditional explosion—explosions translated as “holy shit” moments, moments that could only be “holy shit” by appeasing the most pornographic of our pleasure nodes. So when “I Was Only Dancing” reaches (and I mean reaches) the closest any track will come to a chorus, the song erupts, a descending four-note anthem working magma out from the band’s core, the production seemingly compressing to blast the volume, the whole band going falsetto and tearing-up at the beauty they’ve concocted.

Which is kinda awesome, all manner and attitude of pedal steel, accordion, ukulele, and trichordia (like a mandolin, but with twelve strings) buffering the skips and bristle of a fiddle, slightly misplaced, or a piano, chewing arpeggios as the rest grips onto epic legato. But even with a mighty assemblage of parts and a communal attitude towards recording and touring that have turned up sometime members of TV on the Radio, Super Furry Animals, Fiery Furnaces, At the Drive-In, Out Hud, Beirut, Celebration, and the National, The Ken Burns Effect can’t work insularly. It may seem logical that such an enterprise would—natch—have its neo-folk tentacles wrapped around the throats of a shit-ton of burgeoning scenes, especially those in native Brooklyn. Instead, Stars Like Fleas seems a band desperate to plant something total and enveloping, something that dispels the touchstones of its influences for a grander mess of sound, something even forwardly cult-ish. It wants so sincerely to be intimate with you, to make you forget all that other tactile stuff popping up at the fringes of your brain mush. That’s intimacy, right, ignoring all those other affairs?

Nothing doin’: only when openly confronting its legion of ilk does The Ken Burns Effect really become a stunning and arresting album, begging for such circular talk by its very nature, all shamelessly gorgeous and intermittently bombastic but still rigorous, even clinical in its details. I mean, I’m getting anxious as I try to reconcile the many impulses fluttering through the band: how stuffed it is despite how singular its intent may be; how all-inclusively they pander (that album title—now here’s Ken Burns’s The Hippies) while still retaining an exhilarating invitation for discovery; how mundane and often tiring their formula plays out despite how utterly effective it is.

Burns is a headphone album, trenchant, but it’s also got its big and swarthy flares outshining everything in its immediate vicinity. “Berbers In Tennis Shoes,” in fact, would never admit to being so lovely, so short, pretty, and orthodox, if its flutes and banjos weren’t bookended by “Toast Siren”’s droning baritone sax and scary-ass clarinet or “Early Riser”’s “whrrrs/rumbles/mumbles” (as described by founding member and ubiquitous sound farter Shannon Fields). “You Are My Memoir” would never pass a doodling, programmed beat through the fold without “Some Nettles” waiting to out-last the decade, sparse cymbals and sparser, echoed acoustic chords prattling between washes of organs and synth. It’s predictable, maybe even boring, but its familiarity in structure is the delicious nougat core to a fantastically balanced meal. Sometimes shit just hits right, hits hard. In other words, The Ken Burns Effect, for all its tangled roots, is worth your time.

Because here’s the follow-up to their split with Angels of Light that Akron/Family should have made, the new LP the Notwist most definitely balked on, the calmer, darker Yellow House (2006) that would have been more challenging than readymade for indie-darling coos. Here’s a nice, tempered epilogue to Beaches & Canyons (2002), a Women As Lovers without the grating morbidity, the sequel Brightblack Morning Light could create if they pushed the hair out of their eyes, a Sea Wolf more a year ahead than one behind. Behold the Superwolf 2 that’ll never be, the Fleet Foxes debut I’ll probably want if I ever get around to them, the album Adem could cover, the EP Animal Collective could be proud of, the group that Vashti Bunyan will seek, the aesthetic Chan Marshall will co-opt. Here is the swarm that will overwhelm club stages, the great hippie hope, equal parts noise, Americana, electronica, musique concrete, and power pop. Here’s your new favorite band: their album is under an hour and it swallows universes whole.