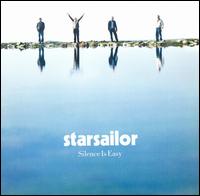 On their debut, Love is Here, Starsailor sounded like half a band -- spare instrumentation, empty spaces, and minimalist production that pushed James Walsh's angst-ridden voice and lyrics to the foreground. As a result, Starsailor appealed to every teenaged girl who, while crying into her pillow, wished that her parents would just understand her. On their sophomore effort, Silence is Easy, Starsailor fill out their sound significantly and explore their pop sensibilities. Many tracks feature beefed-up percussion, electric guitars, and electronic flourishes, forcing the vocals and piano to take the backseat.

This more complete sound suits Starsailor well, because it covers up two of the band's serious weaknesses. Let's be honest -- James Walsh doesn't have the best singing voice. Most of the time, he sounds like Jeremy Enigk without the angelic clarity. Meaning, he's pretty nasally. Let's be honest again - Starsailor's lyrics aren't stunning. For example, here's the chorus to "Fidelity:""This is my head; you're in my world; there's no one but you girl." Whoooweee. Sounds like someone's got a crush! Seriously though, Starsailor sound much better when they bring out the guitars, percussion, and strings. They sound like a rock band, rather than some tween's weblog.

Unfortunately, the new Starsailor, with the full band instrumentation, appears only five times on the album ("Music Was Saved," "Silence Is Easy," "Telling Them," "Four to the Floor," and "Born Again"). The old Starsailor, with the strummed acoustic and prominent piano-lines, owns the other songs (tracks "Fidelity," "Some of Us," "Shark Food," "Bring My Love," "White Dove," "Restless Heart"). Therefore, naturally, Silence is Easy seems fairly inconsistent. You'll never want to hear the weak, weepy tracks, knowing that tight, bouncy poppers like "Music Was Saved," "Bring My Love," and "Four to the Floor" are near by. Thus, the skip button.

Speaking of "Four to the Floor," this track stands out, despite its title, as the best song on the album, period. First, the song best exemplifies the full instrumentation of the new Starsailor, but enough about that. More importantly, the song is actually well written. Sporting three simultaneous hooks (the disco-influenced strings, the piano, the vocals), the song still clocks in at a tight 4:13. I pray that Starsailor move in this direction for their third album; though the lyrics still don't blow me away, it at least proves that Starsailor can write tight songs with catchy hooks.

Though teenage girls will probably adore Starsailor no matter what they release, the band clearly made an effort here to grow beyond their debut. I respect that -- let's take a moment to pat Starsailor on the back! However, Starsailor still has plenty of room for growth. With Silence is Easy, they've grown one testicle. Half their songs even reach head-bobbing territory. Here's to hoping they grow the second testicle next time around.