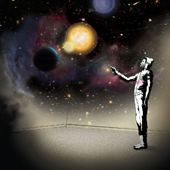 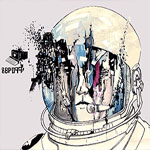 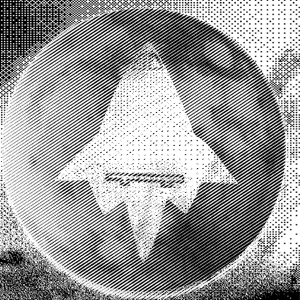 New York’s coolest dismantlers of forgotten consoles only released a record before Christmas, and now they’re already set to hit the campaign trail again with this epic two-hander from the past/the future—now that’s productivity. More sci-fi opera with a hint of grit, The Space Years represents a fine example of teleportation gone awry: a twelve-inch picture disc that got sent across dimensions, arriving on earth as just another handmade CD. The world it’s come from is one where the future started at least fifteen years ago: cosmetic starscapes, alien toys, K-PAX on every TV watch… these are everyday sights, and Bill and Ted really did become rulers and are taking the air guitar into space. Makes you think how things could have been if we only had more romantic budget handlers. Another knot to this project’s chronology is how it was actually already sold out about three albums in advance, thereby overwriting its own platinum sales before it was even a glint in its two fathers’ eyes. I’m not sure how that’s possible exactly, but it goes to show that if you want NASA-scented chiptune music with live drums and physical releases, you better go to George Stroud and Damon Hardjowirogo.

Starscream take the high-concept album and somehow make it uncheesy. Imagining a space programme paid with coins from a thousand Street Fighter machines, Damon and George here stretch their vision into two ten-minute volumes, baby LCD screens cranked to the max. Which they have to be, as this one’s presidential: the story behind The Space Years goes that a third party has emerged—the Space Party, surprisingly—and they’re carefully preparing us for planetary escape rather than dab up all the brushfires on earth. Think Moonraker—only slightly less appalling. Starscream track the morality of this administration as it bulges and dips in office, optimistic beginnings becoming gradually murkier as money disappears up the road. “Parts I – IV” has all the plucky current and bug-zapper tricks one might expect from a celebration parade, its sawtooth chips and echoes of “Bulletproof” by La Roux getting the public lined up in one direction. The only objection comes in the form of a flake screaming damnation if you don’t all but put a cross round your neck, his field-recorded rant about Michael Jackson’s death making Jesus seem madder than a Master Control Program. This crack-happy preacher isn’t the only link the EP shares with Slow Riot for New Zero Kanada (1999) by Godspeed You! Black Emperor: rarely have they, Starscream, sounded more caustic, subparts honed through tight improv and attached with undetected seams. The whole ten minutes throws up the bright melodic diverts that Hot Chip should be tuning into, and Stroud’s drums crash like any tub-thumper who’s about to leave the third planet’s gravity.

Skip forward four years, and it’s all gone Tony Blair: Commodore 64s are no longer cool, space-diesel has shot up in price, and people are getting butterflies. In fact, the butterflies have regressed into fat toxic caterpillars and paranoia’s catching like a rash. The panpipe replicator intro of “Parts V – VIII” is about to go nuclear, its bones coming apart with a crackle. It still features all the big-screen touches of its predecessor—the rousing chord combos, the screams of a cat being fed through a fax machine—but there’s no distracting from the tone of tragedy. The Space Party took our fantasies and beat them back into the earth. They also took our taxes, the fucks, and as the track crumbles into its own coda we’re left with a sense of revolution. An overworked, underpaid, and five-times outsourced scientist deep in the bowels of this project is snapping and has just pressed the nitrous button to end the space race early. Everything melts into one black hole. Chiptune purée: it exists.

And that, in sixteen short minutes, is the story of the failure of the Space Party. Perhaps James Cameron is right, perhaps the kindest thing the astronauts could do is write CAUTION: SAPIENS above the earth. It would take a lot of supernovas and some anal space-mapping, but it’s still got to be cheaper than Sigourney. The Dances With Wolves script too. Either way, the point here is that Damon Hardjowirogo and George Stroud can raise epic thoughts on only a billionth of the budget and also let you get up from your seat before you develop bedsores and require I/V. It takes chiptune cream to make diodes gush this heroically, and if a hydrogen bomb means that after D-Day only cartridge consoles will be working, I’ll be voting Starscream for president. Two EPs of respectable high caliber; that’s better than kissing babies. There’s just one thing I ask before I put my cross in the box: next time, a happy ending. Spoil us.