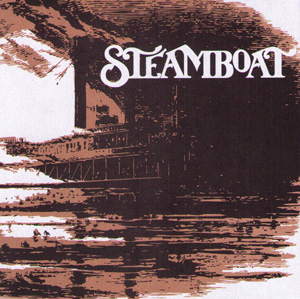 Let’s begin with two telling moments on Steamboat’s debut EP. Leadoff track “How Long” begins with two bars of well-loved ‘70s electric piano all by its lonesome, and it ends with a Hammond organ chord. The organ has that old Leslie-speaker-vibrato sound and at some point during the final chord someone switches the vibrato off, letting the chord slowly settle into an even tone as it fades out. These moments lavish Steamboat’s retro keyboards with doting affection, calling for the listener to notice their material properties and realize that, yes, these are the real deal. Steamboat plays grande olde keys and they record, in the words of the CD sleeve, “on glorious cassette tape.” Not content to worship the sounds of their forbearers, Steamboat fetishize their materials and methods as well.

The band wouldn’t deny any of this. Drummer Jay Anderson put it succinctly: “We’re not original—we just love old records and the way that stuff sounds.” And so be it. So do I, and bands from Belle & Sebastien to the Pains of Being Pure at Heart have proven how essential straight-up rips can be, even without the fabled “contemporary twist” on an old sound. Steamboat are nearly there; they’re on the cusp of a triumphant sphinx-like hybrid of Randy Newman, the Band, and Booker T & the MGs. It’s a relatively untapped and fertile group of influences in Toronto’s flourishing roots scene and Steamboat are convincing in their appropriation. The four originals on this EP are back-porch summer ditties full of sprightly organ riffs and gruff vocals. So there is much to recommend this promising first release, and yet in revealing their burgeoning strengths Steamboat also indicate how they can grow into a more worthy disciple.

Producer, organist, and lead vocalist Matt McLaren has said, “Our dream is to become the Wrecking Crew of Toronto,” and their ambition to be a studio backing band is telling. Steamboat is well-known in Toronto for a series of shows at the Tranzac where they backed some of the city’s notable singer/songwriters. Much of this EP’s focus is on Steamboat’s taut instrumental interplay, and the inclusion of a Parliaments cover and a psych-soul instrumental jam speak to the band’s preference for playing over singing, versions over compositions. The organ and keyboards are mixed way up high, and the songs leave plenty of room for jammy instrumental passages. While the band has a great sound, it’s deployed on songs that often read like afterthoughts. Whether or not the vocal lines were written over preexisting jams and keyboard riffs, that’s how this EP feels. The dynamic is brought into relief on “I Can Feel The Ice Melting” where the Parliaments classic puts the Steamboats originals to shame. Here the vocal and instrumental lines are intrinsic to each other; there are no postscripts or parentheses.

Complaining that the band cannot measure up to George Clinton is, of course, hardly fair, and Steamboat are impressive in making the classic Detroit soul sound their own. Indeed, crafting a compelling sound—if a bit too explicitly revivalist—and interpreting the work of others are such strengths here that they outshine the band’s serviceable compositions, making this the work of a true backing band. Steamboat could build up their songwriting chops and refocus on putting out originals, but let this EP whet our appetites for the band in their desired niche, putting their considerable muscle behind songwriters who inspire them. And if we have to wait a few years for a “____________ & Steamboat” record, let’s have a few instrumental LPs from the band to tide us over.