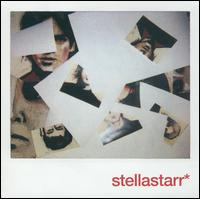 The last time I checked it was 2004, but after listening to Stellastarr*'s debut eponymous album, I feel as if I've been transformed back to the decade of decadence (a.k.a the '80s). Stellastarr* is another band riding the crest of the "new and improved" New Wave genre and just happen to be based in NYC like their more talented and popular predecessors, Interpol and The Strokes. It seems like every band emerging these days has that '80s inspired melody reminiscent of pioneers like Joy Division, Echo and the Bunnymen, the Cure, New Order, and even the late eighties-early '90s Pixies. The aforementioned bands are essential to modern rock history, but why must every other band emerging in the indie rock realm continue to aspire to sound like them? Don't get me wrong-- I'm obsessed with the '80s, but enough already. It's time for new bands to find their own unique voices or at least fail trying.

Speaking of trying to find an original sound, New York Alterna-rockers Stellastarr* attempt originality, but end up sounding like a delinquent child of the Pixies. Lead singer Shawn Christensen imitates David Byrne and (Hot Hot Heat singer) Steve Bays while aspiring to find his own distinctive voice. Actually, Stellastarr* reminds me more of the Buggles than the Pixies; you remember the Buggles, they're credited with having the first video broadcasted on MTV in 1981 with "Video Killed the Radio Star." Classic.

Christensen and company have created a solid, albeit schizophrenic debut filled with hit or miss songs. The lyrics are not profound and fluid, but what they lack in lyrics and vocal range, they make up for with instrumental presentation. Simply put, Stellastarr* know how to rock. The first track is In the Walls, a dark and moody, Ian Curtis inclined track filled with lots of "ohhs." Personally, I wouldn't have launched the album with such an earnest song since the other tracks are lighter in mood, and first impressions are very important, especially on a debut album. The next track, "Jenny," is the dichotomy to "In the Walls." Given their affinity for the eighties, the title could be a coy nod to the Tommy Tutone hit, "Jenny 867-5309;" luckily, Stellastarr*'s Jenny is buoyant, catchy and infectious. The effervescent song has Christensen emitting the lyrics: "Jenny's coming after you/You keep shining on but you'll never know where you're place will be" as the conspicuous background vocals of Amanda Tannen aide this fun tune.

There isn't much to say about the next few tracks for this is where the album temporarily stagnates with repetition and less effective tunes. A Million Reasons begins with an I Want Candy drum beat; "My Coco" is a heavy guitar fueled ballad, sometimes even on the brink of an Arena Rock sound; On "No Weather," Shawn's voice trembles and pulsates with pathos; "Moongirl" becomes a space/classic rock instrumental epic with half the song being an exploration in an omnipresent electric guitar/bass/drums infusion.

After the brief idling, Stellastarr* find its heart and, thankfully, the album increasingly improves. "Somewhere Across Forever," the best song of the lot, electrifies with lyrics like "I'll run away with you…not going to leave here without you…we can build our own world;" the song rocks with sweetness and real fervor. "Homeland" is another melodic, frenetic and passionate track that will make anyone yearn for, well, home. The penultimate song is "Untitled;" wiith this heartbreaking Andrew Lloyd Webber stimulated song, Christensen showcases his usually lacking vocal range. The final uplifting track, "Pulp Song," is a good rock song to conclude the album with the quartet chant, "We're lying/we've lied to you….We've lied to make our point of view."

Stellastarr* might be one of those albums you'd buy due to the hype then probably sell 3-6 months down the line because you'd realize it doesn't live up to expectations. There are some worthy tracks, and Stellastarr* could possibly become a significant band in the pantheon of garage-new wave-New York-post punk music arriving onto the scene if only there were more methodical songs like "Homeland" and "Somewhere Across Forever" (not to mention the confusion cut of 'Arlington Queen" from the Jenny single). Despite some obvious flaws, Stellastarr* has primarily combined entertaining dreamy-pop with pure rock n' roll ala the Pixies. It's too early in the game to call them the next ubiquitous comparison band, but let's just say they have potential and room for growth.