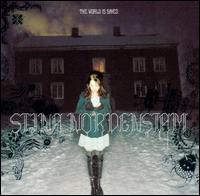 The World is Saved

Immediately, I should confess, I adore Stina’s voice. Her languid throat, although capable of Chan Marshall’s intimacy, seems suitable for massive audiences; a concert hall or stadium isn’t enough, her swoon is meant to drip from trees, blast from the mouths of windows in the apartments that line the street, curl out of mailboxes below those windows, chirp out of the maws of squirrels scurrying across the street, and slip from between the gritted teeth of an old man on a morning walk. It is soothing and broken in every way your surrounding environment isn’t, so watch out for dependency issues.

But this isn’t rehab, so The World is Saved, briskly indulgent and creepily bare, should be embraced for its addictiveness. “I’m Staring Out the World” is majestic, a wilting violin holding longer and longer between the effaced plucking of a Swedish string section. Nordenstam’s part comes daringly close to replacing the melody in her voice with breathy resignation, but as she skirts that line, her orchestra coalesces and then breaks, waiting for her to jump an octave. When she does, she’s backed by silence, and the emptiness is arresting. “The World is Saved,” tagging the backend of the album with a similarly sparse arrangement, moves on music box stilts. Nordenstam’s vocal is wickedly subtle, filling the miles of black space to only become more conscious of her burden in carrying the song, but soon a set of vibes takes over the devious bass and Nordenstam noticeably brightens.

The sorry fact is that The World is Saved has such expertly crafted songs of quiet that louder, more instantly gratifying takes like “The End of a Love Affair” and “Winter Killing” end up going stale with age, not for a lack of pleasant in-between. “Butterfly,” like these songs, seems fat when Stina pits her gorgeous chorus against heavy shuffling drums and Gregorian ho-humming, but she can’t be faulted for knowing exactly when the barrage is most excruciating, raping the melee down to a flute or piecemeal piano. Even “On Falling,” slowed by a thin snare and muddy synths, is lifted by a sax that slides in next to Stina’s choir of doppelgangers. Sadly, the saxophone is buried, and to describe what it’s buried underneath would be to whip out a rehashed string of Notwist adjectives (umm… “pretty?”). Let’s just say that it helps when she palms out quick, seductive lines like, “You're tall and you are skinny, stunning when you sleep / Ecstasy and sadness, I almost couldn't wash the sheets.”

Should Bjork be cited? Nordenstam has maintained a long career like Bjork, hitting thirteen years and mounds of critical praise in her Swedish home. But Stina’s voice doesn’t crack and whimper at all the best moments like Bjork’s. Even so, what Bjork aimed for in Medulla, Nordenstam already has down: “The Morning Belongs to the Night” is all evil tempest, easily deific while still elemental. Johan Berhling’s bass glues the rest of the musicians together with more aplomb and grace than a lot of Medulla’s beatboxing. “125” — should I be so bold? — even tackles melody like I wish Bjork would, flirting with the high end of Stina’s voice in a breakneck enthusiasm and still sounding crystal clear. The song lulls disappointingly in trip-hop stanzas, but I’d give my good nut for more stark, unexpected, bloated crescendos like those that march here too sparingly.

I think I’m afraid, with this disc in my hands, that Stina Nordenstam’s music will continue to be overshadowed, here in North America, by other international bosom buddies (Juana Molina needs some more attention, already) and down home jewels like Mirah or Fiona Apple. Similarities abound: the jazzy electronics, the bedside warble, and the patient structures are all worth the price of admission. Stina, though, has something these other artist’s struggle with: in the guise of an indefatigable restraint, she knows when to stop and when to let go. Fiona Apple’s disgusting absence doesn’t count.