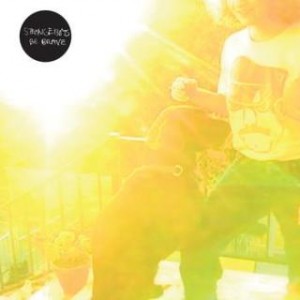 Ryan Sambol, the lead singer of the Strange Boys, sings in a voice that seems to escape, slantwise, from a rusty-hinged slot on his face, enveloped in a cartoonish cloud of dust. If you, dear reader, are the sort of person who is often quick to dismiss an entire record based upon a singer’s vocal affectations, I am asking you to make an Olympic-sized leap of faith to embrace Be Brave. Because I can hear you now, not thirty seconds into track one: “How am I supposed to get past the fact that this dude sounds like a constipated Dylan impersonator?” So I will tell you up front—gently acknowledging that I have heard you use that constipated Dylan line on at least ten other singers—that there’s no getting past it. In fact, if you keep an open mind and press on, you will probably find, halfway through, that Sambol’s strained squawk is an indivisible part of this record’s charm. I can assure you that plenty of people willingly make even larger leaps than this; 50 million Girls fans can’t be wrong.

The Strange Boys fuse a lot of found objects—punk swagger, folk wisdom, the boffo of the whistle that opens “Highway 61 Revisited,” the precise way all faunal feet are compelled to move upon the opening riff of “Louie Louie”—into something cohesive, if also overtly backwards-glancing. Their most obvious contemporary kindred spirits are the Black Lips; both bands share a genuine love of pre-revival garage rock, and both are at their best when they sound like they’re having the most fun, or when they sound most like they are about to spit on you. But Be Brave, the Austin-based band’s second LP, boasts enough examples to set them apart from the garage revivalist flock. “Night Might” and “I See” are quintessential examples of the band’s rowdy-yet-whimsical sound, but it’s the three-minute slice of greatness, “Be Brave,” a prime distillation of everything good about the Strange Boys. Over the sort of riff that drives one to type the word swingin’ into an online thesaurus before realizing, shit, that’s just what it is!, Sambol shrugs his way through laconic pieces of boxcar philosophy (“I gotta be brave / Don’t seem like no choice to me”) and, in the chorus, leads an exuberant call-and-response answered by what could be the gang of Peanuts kids (or, perhaps more accurately, descendants of Pig Pen). And then, like a lazy bolt of lightning, the song grants us something sublime: a surprise saxophone solo, over before we realize it was the only thing the song was missing.

Be Brave doesn’t live up to the rambunctious energy and junkyard swagger of the band’s debut LP, And Girls Club, but instead offers more subdued moments that allow Sambol’s frontman personality to transcend the clatter. The stand-out “Laugh at Sex, Not At Her” is one such moment—in it, Sambol sings about listening to his friends have sex in an adjacent room: “They love each other and for some reason that pleases me.” A strange but pleasant loneliness graces such an image, a feeling that recurs constantly throughout the album (in “Be Brave”: the blithely delivered, “I looked around and thought / This must be what it’s like to be alone”), but Sambol certainly isn’t one to wallow. There’s something refreshing in the way he approaches loneliness, shrugging off the moody weight with which it’s so often addressed by other songwriters in favor of a happy-go-lucky sparseness.

At the end of the album’s final track, “You Can’t Only Love When You Want,” Sambol sings of the titular maxim, “That’s how I lost her / I’m sure of it now / That’s how I’ll lose you.” He says it in his characteristic wail, the kind that might try the patience and cringe-reflex of some skeptical listeners. But if one can embrace the cracks and the tics in his voice, and the derivative bricolage of the Strange Boys’ sound, it’s a moment of simplicity and magnetism on a record with quite a few others just like it.