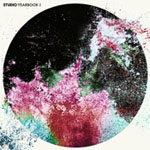 Whoever said that pop songs need to be no more than three-and-a-half minutes evidently forgot to tell Studio, the Swedish duo of Dan Lissvik and Rasmus Hagg, whose debut features two tracks -- "Out There" and "Life's A Beach" -- which exceed fifteen and twelve minutes respectively. Like Manuel Göttsching or Ricardo Villalobos, Studio realize that a track never actually needs to end, that any good groove presents an infinite number of permutations for the band to take advantage of. The duo take elastic bass, layered polyrhythms, spiralling guitars, and Bernard Summer soundalike vocals and filter it through crystal-clear synths and electronics, moving through new wave, early techno, dub, trance, and Afrobeat, without ever sticking in one genre for very long. Studio are like a couple of hyperactive kids, giddy at the possibilities of cross-genre pollination, overloaded with ideas and a completely unpretentious approach to music that will probably have them play every major festival in Europe this summer. Yearbook 1 sounds like it was a hell of a lot of fun to make.

Considering how easily this album goes down, it's refreshing that Studio are relatively free of the tongue-in-cheek, kitschy baggage that usually accompanies indie-friendly dance records. LCD Soundsystem and Fujiya & Miyagi might make direct references to krautrock but Studio actually manage to learn tricks from Can and Neu! without ever sounding derivative. More importantly, the references don't make the album any less immediately enjoyable or danceable; Studio just want to hypnotize you with minimalist grooves, changing things up enough to keep it interesting but eschewing any jarring shifts (though the way "Out There" transforms into full-on dub halfway through is enough to turn heads). Yearbook 1 is organic both in the careful transformations which take place within each track and in the instrumentation itself. Granted, the music relies heavily on synthesizers and maintains a distinctly "electronic" feel in its production but the band keep the arrangements simple and many of the guitar and percussion parts sound like they were actually recorded live. It's possible, given that there are only two members in the group, that this is just an effect, but to be able to close your eyes and imagine a full band tackling this material gives it a greater intensity like the whole thing could fall apart at any moment.

The band's production virtuosity and distinctiveness give some of the shorter, more pop-oriented tracks an energy that the songs themselves would be missing under other circumstances. "Self Service" and "Origin (Shake You Down By the River)" could have been fairly conventional new wave tracks, but the shimmering production is miles away from any kind of romantic overindulgence, detached ennui, or other self-absorbed hang-ups that could distract from the overall groove. While "Self Service" does feature some rather tepid preaching on the virtues of autonomy, it seems to come more from the same collective psyche that informs most reggae music. Studio have no ghosts in their closet, their constant movement upwards is wholly inclusive and democratic.

When some bands try to shift between vocal and instrumental superiority, the latter parts come across needless appendages, and at over 70 minutes, you'd think Yearbook 1 was just an EP's worth of songs stretched to fill out a full-length. Instead, the reverse is true: many of the vocals serve as a warm-up for the instrumental portions, as when "West Side" climaxes into David Gilmour-style delayed guitar. It helps that the lyrics tend to reach upward in the same way as the music: on opener "No Comply," one of the band members (so little information exists on them that I don't even know which one of them does the vocals) sings "It's all in good time / Keep it in mind," to be reprised again on "West Side" with "I hear good times calling me / Solid good times." These are the kind of lyrics that sound patently ridiculous on paper (I already feel uncomfortable writing them down), but gain complete conviction by the buoyant, kaleidoscopic swirls surrounding them.

Yearbook 1 could very well be the next installment in Nike's "Original Run" series though it doesn't actually take any time to builds its way towards full-blown work-out. It does have a relative come-down period, however, which occurs towards the end of "Life's A Beach!" when the sound of waves crashing on the shore serve to symbolically free the listener from the maelstrom of rhythmic flurry which precedes it. The track may be the finest on the album, starting with a simple three-note synth line followed by a single chord that comes a half-measure too late, a nice summary of how well the band maintains simple progressions which slip and slide through stunning rhythmic sleight-of-hand. The song then reaches its climax with winding guitar parts that recall the cut-and-paste virtuosity of the Durutti Column's Vini Reilly, in what is probably the most transcendent moment of the album. The aforementioned waves start to subsume the track, in what is both a glorious release and a reminder of how this band doesn't take themselves too seriously (I mean, the track is called "Life's A Beach!"). The ambient washes provide a nice transition into "Indo," settling the album with more lyrical guitar overtop feather-light ascending/descending oscillations.

Given the breadth of influence and sonic template on Yearbook 1 it's surprising how uniform the whole thing is: Studio mix four-minute pop songs like "Self Service" with fifteen-minute jams like "Out There" without ever sounding torn between styles. It's that same quality that makes this album no more or less than a really excellent dance record and like most electronic albums Yearbook 1 is distinguished and limited by its overall sound. Still, to dismiss the band for this reason would miss the point since Studio work on an intuitive level that departs from the intellectualism of their predecessors. Their debut provides a solid argument that fun, uplifting, danceable music isn't necessarily at odds with trail blazing experimentation.