1. Words To Live By
2. Nice Butterfly Mask
3. What Color is the Sky in the World You Live In?
4. The Parakeet Beat
5. Captain Knowhere
6. Fire Escape
7. The Wind Has Ears
8. Triple, Double, Everything
9. Raw Backwards 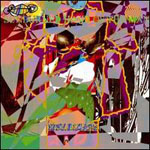 Sunburned Hand of the Man

I'm not quite sure why Sunburned Hand of the Man are touted as the leaders of the so-called New Weird America, especially since Fire Escape sounds more like it belongs to a long tradition of European experimental music; their extended jams over a single, percussive guitar riff are more indebted to Neu! than anything from the US. The album is even being released by Smalltown Supersound, a Belgian label responsible for releases by Lindstrøm and 120 Days. I mean, I'm sure beating hollow tree trunks (or carving whistles from them or whatever) has something to do with folk, but perhaps the connection has something more to do with the way the band taps into folk's communal basis. I mean, Joanna Newsom might draw on a lot of mythic imagery rooted in the traditions of Appalachian folk, but when it comes down to it her music still feels private and intimate. In contrast, when I saw them open for Sonic Youth a couple years back, the "members" (unsurprisingly a revolving door cast), about a dozen or so of them, would pick up instruments at will, moving around the stage in order to play off of different instruments at different times, with resulting mini-ensembles playing something only semi-related to what was going on at the other end of the stage. I'd have to see a few more shows to really convince me, but I suspect this is really where the band shines: the ridiculous masks, the dog walking around on the stage, the fact that you felt you could jump up and join if you wanted (the band even handed out instruments to some people in the front at one point). The spectacle probably belonged anywhere other than one of Toronto's biggest clubs, but the fact that they could make their program tacit in such a faceless venue was impressive in itself.

Unsurprisingly, being enamoured with the spontaneous moment of creation has resulted in some spotty releases -- literally dozens in under a decade, some recorded on nothing other than a cassette. I suspect Fire Escape, which is notable primarily for the band's employment of Kieran Hebden (aka Four Tet) at the controls, is an attempt at a weightier release; if anything it can at least be differentiated from the band's various live releases or albums that were recorded in one take. For anyone expecting a full-blown collaboration between the band and Hebden, however, this isn't it: after the opening 30 seconds of "Words to Live By," whose oscillations sound like Four Tet's rawer live improvisations, a female voice announces the band's name, implicitly introducing the album as "Four Tet Presents Sunburned Hand of the Man." From then on it's harder to feel Hebden's influence, although the electronic elements are more pronounced than they have been on past releases and a greater amount of post-production tweaking seems to have taken place.

I won't say that Hebden didn't go far enough in reigning in the band's sound; after all, their cacophony of sound is what distinguishes the band in the first place, and there's not much Hebden could do in terms of rearranging their material without altering their fundamental dynamics. If anything is flawed here it's the songs themselves, and not their treatment: the title track and "Nice Butterfly Mask," for instance, while both containing a wealth of fascinating sounds, still come off as two versions of the same song, based as they are around a rather crude jam-band riff. These are the most Neu!-like tracks here, but without the minimalist sense of rhythmic propulsion of the German group. And while the guitar and drums are often secondary to the rest of the instruments/sound effects, they're still there, the elephant in the room that betrays Sunburned Hand of the Man as, fundamentally at least, a rock band.

This wouldn't be a damning revelation were the band not striving for something more. But "The Wind Has Ears" is a 15-minute jam that, in complete contrast to the title track, is practically rhythmless. It's not necessarily a better alternative, but the tortured vocals, which conduct unintelligible low groans over formless guitar and percussion, are pretty impressive, even if they're more funny than scary. The standout tracks, however, are those that pare the instrumentation down and space things out, allowing Hebden to form them into something tangible. "What Color is the Sky in the World You Live In?" is just as loose and experimental as anything else on the album, but manages to throw some real curveballs. The track would have worked even as a slower interlude with its beautiful interlocking piano and bass and expressive flute playing overtop. But the band throws a squalling trumpet into the mix without even changing the pace; the song becomes a murky psychedelic cesspool that's tender and violent at the same time. "The Parakeet Beat" could have been a tedious drum circle were it not for the electronically modified percussion that adds some interesting and unusual timbres; the electronic and analogue rhythms play off each other without one ever sounding dominant.

I have no objections to Sunburned Hand of the Man's approach to making records, or even their persistent prolificacy; all music that pushes boundaries owes something to boundless and spontaneous experimentation. The sad truth, however, is that really accomplished albums by noise collectives like Kemialliset Ystävät are intensely laboured over even as they seem to push chaos to its brink. Other bands like Boredoms succeed in their jams through a concentrated focus on rhythm, repetition, and climax. Even Animal Collective and Black Dice are far more concerned with the end product than the process. Sunburned Hand of the Man sound far more spontaneous than any of those bands, to their credit, but unlike the live band, their records don't change every time you listen to them. Fire Escape provides a window into the band's chemistry, but I can't help but feel like they could have made (and will make) a hundred more just like it.