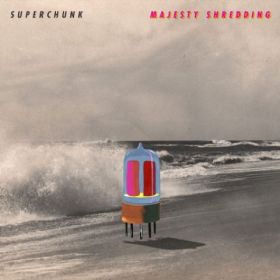 The members of Superchunk are getting older, yet their music hasn’t really aged since 1990. It’s still, impressively, music brimming with the urgency of youth. Majesty Shredding, their first album since 2001, represents a return to their classic sound following a period of experimentation in the late ’90s. It helps that they haven’t been collecting dust: Majesty Shredding is unbelievably fresh for a band whose members could conceivably have parented many of today’s young indie rockers. However, Superchunk’s seasoned professionalism manages to sneak through in the form of carefully controlled, airtight arrangements. The album is irresistibly catchy indie rock through and through, but a bit more chaos and less control could make it something great.

Majesty Shredding starts off with a bang and barely comes up for air throughout its full forty minutes. It’s relentlessly bouncy, from “Digging for Something”’s chorus of “Oh-oh-oh!” to the excellent, tightly wound “Crossed Wires.” The guitars are crunchy but clean, the leads stringently melodic, and lead singer Mac MaCaughan still projects a breathless, powerful wail. This may seem by the numbers, but Majesty Shredding is at its heart the sound of a band having fun, and loving what they do. There’s passion here, and it’s why the album holds up so well on repeat listens.

The best songs on the record are less pure pogo-ing pleasure and more anxious. “Fractures in Plaster” is a classic angst anthem, and “Learned to Surf,” with its two short and sweet verses, manages to turn a looping, repeated chorus into something interesting, changing emphasis and melody. “When I learned to walk,” MaCaughan sings, “you know humans roamed the earth / I can’t hold my breath anymore / I stopped sinking and learned to surf.” It’s these kind of slightly off-kilter generalities that Superchunk specializes in. While late-career reunion albums are often pigeonholed as reflections on aging, settling down, etc., the beauty of Superchunk is that it’s only as personal as it needs to be. These melodies and lyrics could be the soundtrack to anyone’s problems, and we’d all like to think they suit ours the best.

Majesty Shredding is an energetic return to form for Superchunk, and they’ve retained the sound that made them indie stars on records like No Pocky For Kitty (1991) and Foolish (1994). The band is less lo-fi and noisy, perhaps a little bit too precisely packaged. They’ve lost some of their rougher edges, but it doesn’t do as much damage as you might think. The passion is still there, surging through MaCaughan’s voice and Jack Wilbur’s guitar. And that’s what will keep listeners coming back to these indie rock survivors time and again.