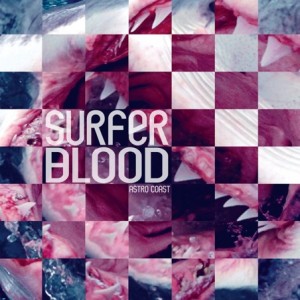 Well, then, I guess I still care about indie rock.

It’s been a genre I grew up with then grew out of to some extent, the records I’m into here and there coming mostly from artists like Women and Wolf Parade who seem very much on their own kind of steez. Surfer Blood, however, lay down an impassioned but streamlined roots revival of indie rock’s classics and “greatest hits,” like a Black Keys for the paisley and power-pop sets. Also for both the East Coast and surf rock, course, showing that they have all of our nation’s most pleasant extremities covered. Here on debut Astro Coast, lo and behold: fuzz and angles; funny and casually literate lyrics rife with good ol’ emotional ambiguity; off-kilter sonic touches that are almost subliminal, subcutaneous; unexpected melodic turns that scorch their tiny fractions of time into your memory for days on end; guitar lines that hew rock music apart and build pyramids within each song. Yet it’s Surfer Blood’s meek stabs at transcendence, their nigh unconscious humming of a deeper resonance, that most endear them to me. Mostly it comes by way of awesome climax-outros: the last couple minutes of “Slow Jabroni” is like all the best parts of Rivers Cuomo (including his dick but before his dick grew a dick grew a Rivers) concentrated in half a song; “Take It Easy” one-ups Vampire Weekend at their own game by introducing the power of cold chills (those guitar lines with that kind of syncopated percussion? Brr…); “Anchorage” is part Sonic Youth on a pop bender/part what Wavves could be if liberated from bullshit, allowed to soar.

Wait, sorry, I promised myself I wouldn’t talk about SY, Pavement, Weezer, the Shins, VW, maybe a little Interpol (“Harmonix,” what). So there ya go. But I say those names and I think of some amazing records (well, minus VW) and while Surfer Blood are certainly inspired by and indebted to their chosen genre, unlike so many of their contemporaries they don’t feel like mere facsimiles or pastiches of aesthetic. I think the transcendent moments bear testament to a muse for the beauty here. As with the best of the bands named above there’s the sense of one intense pang churning in Surfer Blood’s gut, one great big idea at the core of their music that they just gotta let out. But let out, like those clever predecessors, in a way that’s intriguingly, delightfully unclear. For my part I find that Astro Coast is (pretty obviously) a record about relationships but more specifically (and less obviously) about that point in a relationship or the catalyst of a new relationship (“Take It Easy,” “Catholic Pagans”) where you realize you’ve been an asshole—and probably have been one for a long time—then struggle to break that pattern and figure out how to do right by the other person. By record’s end this point of epiphany has been expanded to relationships with places, with self, with a higher power, David Lynch, etcetera.

The biggest turning point lies in that “Slow Jabroni” coda where singer John Paul Pitts gets shocked into awareness by a bad reaction from his object of affection, suddenly seeing that “object” as a person who’s real and damaged just like him. The world’s role becomes exposed as “a wilderness of shit” and so Pitt now reaches out in an earnestly broken way that’s cognizant of the deeper need both have: “...Take it easy on me / They’ve locked us into the same boat / Sinking on the same ship.” He wanders out into the desolation of “Anchorage” (the least apparently pleasant of our nation’s extremities in Astro Coast), isolated and disconnected but not completely—still a metaphysical part of the union, so to speak. He recognizes that he’s “probably not a lot of fun,” that the other person’s got their “own thing going on”...but in places they “don’t belong”; he asks them to meet him in Anchorage, sardonically stating “that’s where the action is” before describing Alaska’s mystic solitude vividly. Then, as the drums stomp, a riff kicks its amp into gear, and lead guitar starts to tremble out a held note, he re-asserts, “I don’t want to spin my wheels / I don’t want to let it all hang out / I just want volcanoes to erupt / And thaw me out.” Whereas an “Earth Angel” motif was cut off earlier by the biting dejection of “Harmonix,” on closer “Catholic Pagans” the same type of guitar theme is allowed to continue, to grow, to underpin the acceptance of change by our troubled narrator, our Holden Caulfield (R.I.P. J.D.). “I don’t want to be a catholic pagan now that you’re here,” Pitt exclaims, finding an indelible way to equate the possibility of real love with the hope of living and render that transformative, even to the point of wanting to survive an apocalypse to see where the relationship might go (“Please don’t padlock your parents’ bomb shelter / Or fill it up with dust and ash”)—this when before, in the most opulent and comfortable of material circumstances, suicide would’ve seemed a mad decent option. All of it, every last bit of Astro Coast, lent the utmost immediacy by ebullient music so well-made it sounds effortless.

It’s in the zealous craftsmanship of doing just about everything right and causing that aggregate rightness to harmonize in vibrant song about trying to be better that the truth becomes evident: this band is for real. I mean, Surfer Blood get it. “It” being indie rock as a glorious version of itself where it doesn’t bore or sound insipid, where it’s a full-blown pop ode to the idea that God is in the details. And if that’s where He is then it’s in the little things of our lives that we live out daily, that we then sometimes think about and talk about and try to reform—a reformation that, while still a constant source of irony and bouts of disaffection, is truly sweeping and mysterious and joyously soul-changing in its own right—it’s there that maybe we can be saved. This is the stuff of which Surfer Blood’s debut album is concisely and sorta perfectly made.