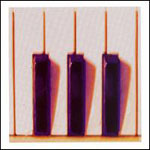 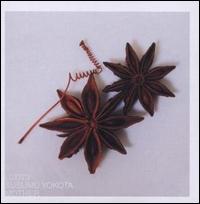 Ready for some mass generalizations about Japanese culture by a Western writer with his head completely up his own ass? Because while researching for this review I’ve discovered that any consideration of Susumu Yokota’s prolific, perhaps seminal career as an electronic musician must make mention of the ambient arm of his music resembling Butoh dance. This, when you think about it, is about as uselessly unrevealing as saying that Tim Hecker’s music resembles maple syrup. Perhaps ambient music defies easy description because there isn’t a singer yelping their thoughts in clumsy literalisms all over the place. Perhaps music writers are lazy.

For one thing, Yokota isn’t ambient. It’s true that his music is dichotomous, seemingly torn between traditional hook-laden techno (is techno old enough to be called traditional yet?) and the repetitive, hushed arrangements associated with ambience. But Yokota allows the obsessive constructedness, the uplift of his house music (Cat, Mouse and Me [1997]; 1999 [1999]; Magic Thread [2000]; Will [2001]) to encircle his ambient tendencies in a way that supports it about as effectively as string around a shattered bone. And it’s between these two impulses, contrapuntal though they are (god, I’m trying not to type yin-and-yang), that he’s seemed to swing for fifteen years.

Mother falls solidly on the ambient side of Yokota’s catalogue, with The Boy and the Tree (2002), Grinning Cat (2001), and the still lovely Sakura (2000). One resorts to conversation of his nationalism not because it leaves an indelible mark on his music, though the house and ambient scene in Japan is interesting and surely worthy of discussion somewhere if not here. One speaks of Yokota’s music being Japanese because a) he’s been mechanically releasing this music, with tiny variations, for so many years that he’s as much a contributor to the culture of Japanese electronic music as that culture is to his music, and b) he leaves little else upon which to base the discussion. Hecker begs a discussion of utopianism; Keith Fullerton Whitman builds monuments to terror-ridden distortion so that he can cascade them in chunks down on his listeners’ heads; Stars of the Lid are like watchmakers who meticulously assemble their love letters to time; Fennesz takes years to put out his records. Yokota, on the other hand, names his new album Mother and introduces a woman’s vocals.

The problem with relegating this record to the waste bin on these accords is that he’s also been at this game too damn long to misstep in any painfully obvious way. The album may not be a grower, but it does click along at an undeniably confident pace. The three chord guitar line in “Breeze” may be predictable, but Yokota knows enough not to discount it for that alone, and actually makes it a prime element in the song’s immaculate construction. That by song’s end Mother‘s weakest track is recoverable is itself testament to Yokota’s gradual transformation from enthusiastic fan with no sense of self-editing to careful planner with an innate ear. It may be hard to justify when I say that Mother ends up as consistent an album as Sakura, but it sure feels right.

So, for all intents and purposes, perhaps it is useful to compare Yokota’s ambient music to Butoh dance. Maybe our cultural interpolation of Yokota and Mother as another in his series of lockstep movements, as a mesh of stereotypes and primary colors, is as important as the music itself—more even than the degree to which that can be said about any album, any commercial, any bit of noise made by a passing train. Yokota has carved out a niche for himself far bigger than music this binary has a right to and, even more impressive, has legitimized it. The music is unchallenging, pleasant, and enjoyable. All that’s left is for us to problematize it.