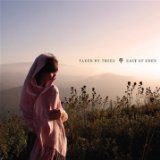 East of Eden is a short, oddly satisfying album in which Victoria Bergsman (ex-Concretes and -“Young Folks”) is able to reap the various emboldening fruits of an excursion to Pakistan while never exploiting the exoticness inherent in her travels. Somewhere likably between the full “world music” immersion of a band like A Hawk and a Hacksaw and the checking-off-signifiers-indie-pop of, say, Vampire Weekend (we snarl), Taken By Trees, Bergsman’s solo project, is able to focus on simple melodies and a comparably pristine sound quality rarely used for such tablas and South Asian guitar plucking (apart from New Age compilations), Bergsman’s appropriately breezy voice filling in cracks and making the whole come off as an incessantly relaxed affair. There is a sense of wide-open possibility in the big spaces of this album, and when Panda Bear subtly replaces Bergsman in the background chant of “Anna,” it’s almost as if this collaboration doesn’t foreshadow the totally excellent ukulele-swinging Animal Collective cover five tracks later. Bergsman seems to be intoning that—despite all the obvious influences all over this album—nothing is truly tied down or limited by its origins.

This all leads to East of Eden being mostly a triumph of presentation, harnessing foreign elements in a thorough (and vague) enough way to completely overtake, familiarize, and render meaningless the neither-here-nor-there-ness of Bergsman’s lovelorn lyrics (“I didn’t know how much I loved you / Until today”). The songs benefit hugely from being brief and low-concept; unlike most globe-traversing bands these days, Taken By Trees’ emphasis is in the transition, from alienation to recognition and comfortableness, of the disparate sonics within the artist’s oeuvre—a real Graceland (1986) moment of intelligent appropriation from an artist able to achieve that because she doesn’t pay it much mind.

This entirely works in Bergsman’s case because she lacks any sense of overbearing personality; her willingness to be nothing more than an interpreter, or—in the case of “Wapas Karna”—simply to be the bearer of an album-length canvas upon which some local singer gets to paint an interlude, possesses an endearingly selfless quality. By selecting and concentrating on only a few points of influence (in this case: Pakistan and Animal Collective), she is able to articulate what draws her to them (mostly: their evocative, almost empiric melodies) and with the lightest of touch share with us, sometimes misguidedly but always sincerely, the complex emotions she’s discovered in her travels.

As far as a career move, I’m not sure what comes next after an album like this. Paul Simon and Zach Condon each made the imperial move to different countries…with diminishing returns. Vampire Weekend and A Hawk and a Hacksaw are stuck with their palettes forever, one turning it into chart-topping fodder and the other into a side-show staple and movie music. Taken By Trees is too nebulous of a project to fit into any of these categories—personality-based for sure, but of a personality that makes an ethos out of curiosity, that’s dedicated to a kind of precarious and symbiotic balance without hiding behind or trying to harness unfamiliar sounds to a singer or band’s unstoppable sense of self. And for East of Eden to be such an assured sophomore release, Victoria Bergsman has a kind of steely reserve to take herself further out of the picture on records to come.