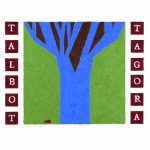 Lessons in the Woods or a City

We need not talk about common cause. A lot of these lo-fi acts have little to do with each other, excepting the obvious carp that a lot of them—at least a lot of them—are impoverished and scrawny tailgaters with not a whit of talent. Enough, now, to cede your musicality to noise, enough to play half-assed and call it art; else one might just recruit proper musicians to play a proper album and then be proper boring. Ultimately what separates your Times New Viking from your Wavves is irrelevant, because Wavves is irrelevant in a world where Times New Viking exists and no one band in this current lo-fi crop is currently better at communicating the tally-ho excitement of building your own shit out of somebody else’s ordinary standards. Others at least try for something different—whether it be the guitar schizophrenia of Psychedelic Horseshit’s Magic Flowers Droned (2007) or Eat Skull’s broad humanity. To this list we can now add Talbot Tagora, who’ve transplanted the principals out of punk and left in enough of a void to suck in as many counter-intuitive musical ideas as it’s possible to get across as a three-piece “rock” band.

Lessons in the Woods or a City isn’t a statement of beauty, or purpose, but it sounds fresh—you have to really listen to hear any discernible, traditional forms emerge, and when they do, it’s not with an olive branch or easter egg invite but with a long hard slap in the face. This record takes its fantastic stewardship of weird punk geometry and runs it to the ground, straight-up rejecting fire in favour of attitude and mindset; every track, more or less, sounds the same. It’s great, dense stuff but one can’t help but wish for some change.

And though I get that, in the abstract sense, there’s probably some value or endgame to the herky-jerk and arrhythmia; though it’s hard to disagree with a group that can throw dissonance on some stutter steps and not make it sound thoroughly punishing, a group (no less) that miraculously pushes this record as a rock collective and not, say, as some arty wiener kids; though it’s hard, really, to find much fault with Lessons, I can’t help but not like it much. For the reason that it’s hard to crush on a record that seems to avoid easy hooks but still affords (each time) the chance for a really catchy melody to prop up at any moment. It never does. Lessons is a protracted trip of uneasiness. Its big selling point is its unvarying reluctance. Its big fault is its…unvarying reluctance.

Because, look, I can’t not say that the best songs on this record are the ones with the hooks, with those all too fleeting opportunities that hide deep in these tracks like candles so that for a few incandescent seconds we might see the face carved onto the pumpkin. What I’m saying is I want to see more of that pumpkin face. Like when “Ichthus Hop” develops a pout, or how opener “Mixed Signals Through Miles of Pilgrimage” cleverly turns its anti-melody on its head at the top of each verse.

Since there appears to be but one type of Talbot Tagora song, we might as well do away with track titles, track lengths, and further distinguishing countenances. These songs are showcases. One hopes that past the efficiency, built into the unhurried sound of this work, is a band that will threaten the peace someday with something maybe a bit more generous. On this, their debut, they’ve shown us they can pull downtrodden bents as good as anyone. But I’m being serious, serious rock band: on your next record I want to hear something more Pope-like.