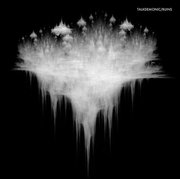 It’s funny how genre descriptors take on a life of their own. Take, for example, the nebulous term “post-rock”—about as semantically vague as they come. It can’t be taken to have a simple chronological sense, because rock music, for better or worse, isn’t quite dead yet. Nor does it designate some singular style into which rock evolved or is evolving, because bands like Tortoise, who were slapped with the tag early on, arguably owe more to jazz, electronica, and dub than they do to any species of rock. Despite the ambiguity of the term itself, however, it has come to have a fairly specific set of associations: the lack of vocals, an emphasis on textural depth rather than melodic movement, and a patient dynamism characterized by drawn-out crescendoes and diminuendos. In this case, it seems that the music has defined the term rather than the term defining the music.

So then what to make of Portland-based duo Talkdemonic, whose fourth album, Ruins, condenses and refines the multifarious styles gathered under the post-rock tag into something that, in structure and affect, often feels a lot like simple rock or even pop music? It isn’t that we haven’t heard these sounds before: “Midcentury Motion” rides a minimalist electro beat that would have fit nicely on Tortoise’s Millions Now Living Will Never Die (1996), while the feedback squalls of “Violet” and “Midnight Pass” are reminiscent of vintage Mogwai, and the controlled catharsis of album highlight “Revival” owes a debt to Explosions in the Sky. What sets Talkdemonic apart is the economy with which they integrate their influences. This isn’t an album that requires much investment to appreciate; it’s a set of highly accessible and enjoyable instrumental statements that, like all great pop songs, say what they have to say concisely and never wear out their welcome. Which is more than I can say for much of the work of any of the aforementioned bands.

But this sense of economy isn’t all that distinguishes Talkdemonic from their post-rocking peers. They have a secret weapon: violist Lisa Molinaro. On his own, group founder and multi-instrumentalist Kevin O’Connor can conjure up a pretty decent racket, but it is only when Molinaro plugs her viola in and saws away that most of these songs really take flight. Again, this isn’t a new idea; way back in the 1960s, John Cale pioneered the use of the electric viola in a rock context with the Velvet Underground—and if this happens to be news to you, Velvet Underground fan, it’s because the instrument was rarely foregrounded in the band’s music, instead serving to create the dissonant, otherworldly background textures of songs like “Venus in Furs” and “All Tomorrow’s Parties.” Talkdemonic uses the viola much more liberally: the use of the instrument on “Midnight Pass” is reminiscent of Cale, but Molinaro is also responsible for the lovely sustained chords that are the backbone of “Chimera,” the wistful harmonies of “Ruins,” and pretty much all of “Violet.” On an album without vocals, her viola is the closest thing here to a guiding voice, and it sings beautifully.

Despite their indebtedness to more prominent post-rock forebears, then, Talkdemonic have strengths all their own. Which isn’t to say they don’t also have weaknesses. Much like Explosions in the Sky, the band’s sense of dynamics can be a little bipolar, as songs like “Violet” and (to a lesser extent) “Midcentury Motion” jump back and forth between pretty, subdued sections and distorted freakouts in a way that tends to diminish, rather than accentuate, the effect of both. The pacing of the album also leaves something to be desired, as most of the quieter pieces (which happen to be some of the best) are lumped together towards the end, and closer “Palace Walk,” after fading in with a lovely recurring harpsichord figure, ultimately ends a generally exciting album with a bit of a whimper. But these minor quibbles are easy to overlook on a record that is, the majority of the time, flawlessly executed. Whatever genre you might care to put the finished product in, these two clearly knew what they were doing on every second of Ruins.