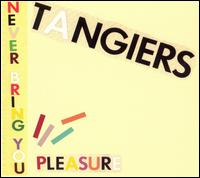 Along with fellow Toronto natives Deadly Snakes, garage-rockers Tangiers found themselves in the middle of a minor hype-storm following the release of their 2003 debut, Hot New Spirits. Though being labeled a hot new garage-rock group "to watch" will often result in just as much immediate trashing from the indie elites as it will bring attention to the masses, the attention surrounding the Tangiers, in the end, did neither. Hot New Spirits failed to really take off, despite the mounds of critical acclaim and a great live show, and the usual "well, they're not that good" backlash banter was also thankfully absent. But rather than sit around and blame "industry trends" or the cosmos, the group wasted no time putting together twelve more tracks as a coy reminder that that yes, they do still exist and no, they weren't another talentless hype construction.

And really, what better way to convince people of this than to release a sophomore record that tops their debut. They made a few line-up changes -- dropping guitarist Yuri Didrichsons, while adding ex-Guided By Voices drummer Jon McCann and keyboardist Shelton Deverell -- headed to the Gas Station Studios in Toronto and, as can be evidenced by Never Bring You Pleasure, played their asses off. Though the core of the record remains very much an extrapolation of Spirits, the performances sound tighter, the production (courtesy of the group and Dale Morningstar) more in-depth, and the songwriting, split -- along with vocal duties -- between guitarist Josh Reichmann and bassist James Sayce, noticeably stronger.

The vocal interplay between Reichmann's classic rock tone and Sayce's Joel Plaskett-esque vocals, often just on the edge of falling disastrously out of tune, offers the record a fair amount of its appeal. Though the hooks aren't always there (none of them completely lack at least a single decent one, though many rely a little too much on the strength of a single piece to hold over the song), the off-kilter harmonizing usually manages to give the sometimes straight-forward rock tunes just enough edge. "We're So Breathless," the record's tongue-in-cheek closer, is perhaps the best example of this, taking an otherwise slightly vanilla melody and building it toward a climax that drips with an awkward tension.

Then there's album highlights "Energy Jaws," "I Don't Love You," "Tropical Ceremony," "I Wanna Go Out" and "I've Been Calling." Given the advantage of songwriting that trumps even the best from their debut (especially from Sayce, who offers the most consistent material for the record), the songs absolutely spark, driven by the spatious production and Deverell's clever use of keys while Reichmann and Sayce, their lax rock-and-roll swagger still very much in tact, deliver the melodies with an intensity that lacks any of the faux melodrama that can infect garage-rock bands like a parasite.

Frankly, I don't really need to add to the world's over-abundance of bad puns or obvious one-liners to work this record's title into an explanation of how good it is. That they've thrown together a record this strong just over a year after releasing their debut is impressive enough, but I suppose not really that surprising considering the skill they had proven with Spirits. And, though it failed to make the Tangiers one of the forerunners of modern indie-rock, a follow-up like this should certainly help their case. No doubt Pleasure will receive the same level of praise, but whether or not their large potential audience will listen after years of critics crying wolf has yet to be seen. But if lack of mass attention is what drove them to make this, and really it probably wasn't but I'll go with this anyway, then maybe a few more years of relative obscurity couldn't hurt, hm?