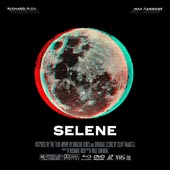 I’ve already said my piece on Moon (2009), but it’s worth adding that director Duncan Jones tried to upstage Danny Boyle by cutting “Walking On Sunshine” into his soundtrack (he wanted to hint at how his modest sci-fi film could outshine an extravagant £20 million rival). Using the same logic, Max Tannone and Richard Rich must have been watching Moonwalker or listening to “Harvest Moon” and “Can’t Fight The Moonlight” when they conceived Selene, a surreal pay-nothing mash-up that doesn’t so much upstage Jones’ film but strip it of all essential parts, reshaping them into a hip-hop concept album.

Sounds crazy, but Tannone—a Manhattan producer responsible for such fusions as Jaydiohead (2009; Jay-Z + Radiohead), Mos Dub (2010; Mos Def + misc. reggae) and Doublecheck Your Head (1992; Beastie Boys from 1992 + Beastie Boys from 1992)—was possibly the only MC on the planet who would even want to take the strains of a celebrated sci-fi score, add beats, and then let Richard Rich spit all over them. Rich might not be as renegade/experienced as his partner, but in terms of attitude he’s fast approaching the heights of Charlie Sheen, capable of extraordinary outbursts. Once you hear his grumblings laid across Selene‘s five tracks, you’ll realize this isn’t the first conveniently epic hijacking of a film score; just don’t first get an orchestra to perform it for use in future reality show segments—instead turn it into a rap opera and give it away for free, escaping copyright law in the process!

Perhaps wanting to preempt the inevitable recycling of Mansell’s score, Tannone’s speed in assembling Selene hasn’t impacted its originality. The producer does a fine job of dicing Clint Mansell’s atmospheric pianos into something suitably spit-worthy, and when Rich behaves himself at the mic, the result are certainly impressive. The rapper’s thoughts swing between coping with isolation and imagined additions to Moon‘s screenplay, such as on the desperate “Back in the Dark,” which offers some surprising lessons on loneliness from a white boy with a Brooklyn accent. Rich freestyles to Mansell’s twinkles, his repeat verse of “Back in the dark, here I go again / Livin’ by myself, I’m my only friend / Been here before but it never got better / Wear my loneliness like a scarlet letter” burning while Tannone plays guitar. If you ever wondered what kind of domestic strife could drive a man to accept a three-year job drilling for helium in space, Rich offers a scenario or two. It’s a serious antidote to the false start of “You Are Here,” where instead of trying to compose an apology to his ex-wife, he’s making the first recorded zero G wanking metaphor with lines like “At least I ain’t got no children / So many times I’ve killed them.” That’s how it sounds in his delivery anyway—either that or like he’s trying to blow the film’s big twist.

Where Selene stumbles is when Rich runs his mouth off, which he develops a serious proclivity for every time Tannone hands him a vignette. Though the film itself wasn’t exactly PG-13 (and nor should it have been—what with putting a bloke alone in space with second-hand mining equipment), there’s no way Sam Rockwell could’ve carried the script if he kept using “motherfucker” as an adjective. True, temperament plays an important part in both the film’s story and Selene‘s, but Rich seems to lose it whenever he tries explicitly explaining anything: “I’m a fucking person not digits / I programmed myself not to give a fuck / Humans go crazy so I’m cold-blooded / Nothing you can say to change me, I’m so stubborn…” Then he attacks chimps or some shit like that before finally rapping over Mansell’s more sinister sound effects. It’s a shame because, for the majority, the combo on Selene works well. One track previously we had “My Sheep Dolly,” where Tannone was looping breakbeats around snippets of dialogue from the film. Rich was calmer there, possibly thanks to the Neil Armstrong samples, and had broken off from cussing to emit genius like “Wait a minute / Let me look at your right thigh” as he sized up a love rival.

Fortunately Tannone keeps a clear head for the conclusion, even breaking silence himself to guest on “Me Today” (“Max, did I just ruin this? / I really do this shit / I’m just trying to prove it’s really me and not a duplicate”). He chops up the “Nursery” cue from the film, bending Mansell’s heartbreaking strings around an unbroken 2-step beat. And if that was Selene‘s objective—to add sass and moves to a small intimate soundtrack—then it works best here. It’s no Hats by the Blue Nile, but it does get across the hollowness of solitude in a way you can gently bop your head to.

Despite Rich’s occasionally caveman temperament, and despite the calls on Youtube for Tannone to release instrumentals, Selene is a successful nineteen minutes and can cleverly market itself to both camps of film score completists and movie obsessives. How the remainder of the population take to it is something I’m not so sure of. Even Kevin Spacey whispering, “Are you OK?” might not take the sting out of Rich snapping for some people, particularly when he turns diva and orders, “In the video for this shit / In the video for this shit / Hope we can afford this shit / Need to board a spaceship / Into orbit.”