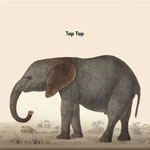 It’s only when faced with the challenge of reviewing an album by a band about whom very little has been written that you realize how much record reviews rely on filler. You know, those sometimes-juicy, sometimes-inane biographical details about an artist: the who-knows-whos and who-hangs-out-wheres; which messed-up relationship inspired this or that song; when [insert artist’s name] got his first guitar and how it felt to smash it against concrete when his girlfriend -- who, incidentally, all of the songs are about -- tore his heart out and spat on it. Okay, okay -- not many band bios are this lively or revealing; there are only so many Arcade Fires or Aaron Carters. I’ve come to rely on having at least a few of these tidbits, though, for most reviews. Here I have exactly two: Tap Tap is from Reading, England, and their front man’s name is Thomas Sanders. Don’t choke on your epiglottis. Bonus fluff includes: 1) they’re an emerging, blogged-about band that will probably be shit-hot by year’s end, and 2) they don’t even have a website yet.

So is it all a ploy for mystique? Did they spend their web money on illegally-imported panda furs to dress their groupies, who are all mp3 bloggers? We might never know, but whatever the case, having next to no information about a band can make discovering (or, “making shit up about them”) that much more fun. It leaves us to ponder, for instance, whether Tap Tap named themselves after a “tap-tap cab,” a colourful mode of transport frequented in Haiti. No? It’s probably for the best. Too much biography can sometimes smokescreen a band, and without the cab-driving panda-groupie-blogger backstory we’re free to engage with the music. Who are Tap Tap? Who cares! Lanzafame is a hell of a lot of fun.

Everyone who’s talking about Tap Tap says they sound like Canadian indie bands Wolf Parade and Arcade Fire. I don’t hear it. Clap Your Hands Say Yeah? Well -- you got me, ‘cause yeah. Sanders’ voice sustains a similar-frequency whine that is as effective but not quite as aggravating as Alec Ounsworth’s, and if the rhythmic opening of “Little Match (Big Fire)” didn’t take the turn it does for the minor, it could have kicked off any track on Clap Your Hands Say Yeah. I hear some Beatles in the arrangements, and even a little Richard Thompson in Sanders’ delivery. “Here Cometh,” with its spirited guitar and hallucinatory harmonies, sounds like it could have been cut from an M. Ward album.

But even though it exhibits these disparate influences, you can’t exactly call Lanzafame a mixed bag. The album, like most debuts, is very consistent: buoyant, harmonic, effervescent pop/rock -- although there’s a little bit of ska (“Way to Go, Boy”), and a little bit of folk (“Talk Slowly,” “Here Cometh”) -- that bounces and pulses throughout with trail-blazing intensity and joy. But that’s the main thing, I think, that sets Lanzafame apart from albums by the aforementioned indie rock bands: it’s much less of a drag. Don't get me wrong, I like Arcade Fire and Wolf Parade and CYHSY; it’s just that I’m not always prepared to go where a full album dose of their music takes me (it’s such an intense, brooding, self-conscious place. And Win and Spencer both sound like goblins).

The album’s opener “100,000 Thoughts” starts with some muted ukelele and expands into throbbing bass drum and a “Chopsticks”-style dueling guitar riff that re-surfaces throughout the track. And just when you think the involuntary head-bopping inspired by the song will stop, “She Doesn’t Belong” steamrolls into your eardrums and the joy-induced convulsions begin to spread throughout your body. (Seriously, I don’t listen to enough music that makes me this happy.) Both songs feature themes of dreams and forgetting -- “she slipped into my dream / and now I can’t remember anything” and “you had a very good weekend but you can’t remember where you’ve been” -- and make you wonder with what mind-altering substances Tap Tap do spend their weekends.

The album’s not perfect. There are some major issues with pacing; the tracks could have been ordered better and most share similar tempo. The pounding drums commence around the 20-second mark on most tracks, and the mood switch between “Talk Slowly” and “Off the Beaten Track” is especially rough. But I’m so charmed by Tap Tap’s clever, disjointed lyrics -- as on the repeated back-up line “I’m not a bad guy, no I’m not a bad guy / when I really try” -- and shiny, upbeat melodies, I’ll forgive a few choppy transitions.

The next CYHSY-style web sensation? Likely. An album worth picking up immediately? Definitely.