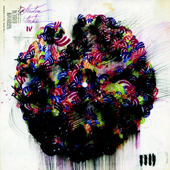 Appropriately, Flying Lotus’ Brainfeeder imprint is releasing Teebs’ (L.A. producer Mtendere Mandowa) debut LP. In the swift span of its eighteen Donuts, its eighteen tracks, its eighteen cyclical impositions of jazz and electronica batter in the frying fat of hip-hop, Ardour introduces us to what other experimental instrumentals sound like in a world after Cosmogramma. What’s insane is how quickly the student approaches and perhaps even eclipses the master; Ardour is the missing link between the Avalances and Prefuse then between Prefuse and FlyLo then between FlyLo and whatever’s next. It has all the freshman focus of a 1983 (2006) or a Vocal Studies & Uprock Narratives (2001)—you can practically feel the damn concepts—while exuding an effervescent warmth that can only remind me of Since I Left You (2000). Shit is mega-gorgeous.

The title and the cover picture (drawn by Teebs himself) are perfect and go a long way in letting me off the hook of describing this record’s overall vibe—but, if I were to take a stab, uh, ardouriffic? I can only take the noun and turn it into an adjective, so fervently does the fervency permeate every found sound, every made one. But tied in with that ubiquitous zeal there’s a bit of satiation in the record’s posture, too. Like, Teebs loves to get some so much he’s already got some and is presently getting some more. It’s tempting to throw the “post-” idiom at heady, progressive, difficult-to-classify music such as this, but the only one I find even halfway apt is “post-coitus”; constant surging and ebbing of tension makes the beats of Ardour riveting and not just magnanimous in their pleasantness. Come get some, Teebs invites, and that’s a hard invitation to refuse.

Most of these beats exist on three levels: a thick tapestry of sound that immediately greets you, as on opener “You’ve Changed” with a warbling woodwind sample that bleeds out into rapid yet smooth loops and accents and an almost incidental percussive effect that sets the stage for level two; the beat programming, deft and minimal, usually working the already existing sound construct into a downbeat and some sort of snare effect on the four, like the rubbery bellows and snap of “Bound Ball”; which is all putty in the hands of level three, the manipulation, the subtle stretching and squeezing and switching out of elements that Teebs works with zen savoir-faire. The very FlyLo-ingly titled “While You Doooo” manages a woodblock rhythm and a clipped inhale over harp sounds that double up for a few almost unnoticeable measures in the middle of the track (but if you do notice them, boy) and then submerge at track’s end. Teebs’ beat constituents are fractions of aboriginal recording given a calm life with stealthy movement intact—their survival in these new environments is a portrait of grace.

“While You Doooo” is but mere precursor, really, to “Moments,” where a glissando swell of bright noise is transformed by DJ skip effect into pure beat, punctuated by what sounds like SP-1200 bass drum. Nostalgia walks into a club, becomes thumping nostalgia. There’s a moment on “Bern Rhythm” where its resounding tones settle and let a hauntingly familiar guitar strum that defines the track’s chord progression emerge to the front like some embryonic memory of our collective, appreciative past—all us heads, punks, geeks, people. But Teebs is not too gentle: with the very next track, “Felt Tip,” he’s pushing that level three manipulation hard, directing a chiming wash into an ever more insistent sequence of chops that even end up distorting a background vocal effect which initially seemed immune. Time, experience, aesthetic—all mutable (and interconnected), which is a necessary trait in order for them to go on existing. Teebs knows the more he works his sounds, though he clearly loves them as they are, the more “current” they will be; so he plays with that, creating music with a temporality that oscillates between ancient history and the other side of the cutting edge. “Wind Loop” starts off with a mesmerizing NiGHTS jungle collage before flying by antiquated windchime patch; on “Long Distance” those same elements are sped up, concentrated, and mutilated into the future, Gaby Hernandez amicably cooing on top.

And on throughout Ardour presents an effortless translation or, actually, transmigration of Eros’ music canon—jazz, soul, orchestral pop, Sega Saturn soundtracks, and other things lost—from out of a removed haze into a modern clarity, into a present body that recognizes the more music grows the more it confines into category and niche and sorts out what is meant for dancing and what is not, what is meant for lovemaking and what is meant for thought, what will be on DJ Hero and what will be on Rock Band. Ardour seeks only to deliver intense feeling and unmitigated vibe, hot chicken soup and a shot of bourbon to our dilapidated emotional states and divided attentions. The record’s total impact is like that of a sloppy yet immaculate kiss—forcefully full on the mouth but with delicate lips—that reignites an endless array of old passions. What a blessed thing.