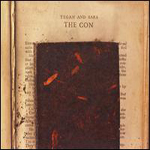 Saying that Tegan & Sara's new album The Con is about a deeply dysfunctional relationship probably won't conjure forth wellsprings of fascination in the psyche of the average CMG reader. Sixty percent of the albums released this year will share this subject matter, and probably sixty percent of those records will, like this one, be produced by Death Cab's Chris Walla. In the wide field of earnest indie-pop production of late, Chris Walla is the standing champion, producing cuts for his own band as well as running mates the Decemberists, the Thermals, and Hot Hot Heat in the past few years. Walla acquits himself admirably, shoring up the at-times-laborious ambition he displayed on The Crane Wife (2006) into production that gives the girl's ubiquitous hooks room to breath. His fingerprints are perhaps the more admirable because they are subtle here, finding ways to vary the watertight harmonies of the sisters Quin, bolstering their egg-shell thin voices with layered vocal tracks and instrumentals that run parallel to sung melodies.

The real credit, however, goes to the songwriting of the eponymous duo. This album was not "saved in the production," as it were. The Con is a document written in the half-frenzy of a clusterfuck. Many of us have experienced firsthand this kind of gradual personal disintegration, but for the uninitiated let me attempt a comparison. You know the long break-up? The one where you still keep hooking up with your ex because it's comfortable, but all the time looking for the next step, but all the time hoping that the wayward beau hasn't found someone else, but all the time worried that s/he'll want to get back into the relationship in earnest, but you're pretty sure that's not what you want, but sometimes you get drunk and you're not sure, etc.? Now imagine a whole dating experience like that from start to finish. This is the closest the human brain gets to approximation of the cerebral cues that make dogs chase their tails in an attempt to bite themselves.

"Back Into Your Head" follows in quick succession with a similar thrust but a new tactic. Single piano notes stretch toward the choruses, strung on a tambourine lanyard, jangling and winsome. "Relax into the need / We get so comfortable / Remember when I was / So strange and likeable," sings Sara (Tegan?), bouncing the last syllable off the beat, turning "able" into "a bowl." Then getting to the point: "I just want back into your head." And this is the point of the whole record and the whole despicable process it depicts. The Con is about exactly what it sounds like it's about: head games, but not just the ones we have played on us, but the ones we play on others, and, worse still, the ones we inflict on ourselves.

It's our own lies that we fall for the hardest, so insult is heaped upon injury when we find that there is no target at which we may level an accusatory finger while we nurse our bloody lip. "Dark Come Soon" is a dark ballad soaked in rubber-band synth strums, eased aside by surging down strokes in the bridge that eventually break open into shimmering layers while Tegan (Sara?) blurts aggressively: "So what? I lied / I lie to me too." She sings this refrain twice before issuing muddled warning to the love-is-a-mistake-worth-making set: "Hold out for the ones who love you / Hide out from the ones who love you."

The Con is about being so turned around that you're not even sure if you're the con man or the mark. Do marks feel guilty when they feel their empty back pocket for the first time? Do con men feel victimized when they open the wallet? Who's stealing what from whom in this situation? Embraces become strangleholds, deceit becomes the only mode of communication, the whole enterprise is so nebulous and intertwined that it's impossible to tell who's who much less who's winning. "Call It Off" ends with a note of uncertainty that belies its decisive title: "Call it off / Call and break my own heart / To make myself feel bad there's a chance / I'll start to wonder if this was the thing to do."

If you know how something like this feels then the songs on this album will resonate with you. If you don't then you may see it as little more than a slickly produced emo album. Certainly it is not perfect, and in its weaker moments tends toward the melodramatic. "Floorplan" begins with the line, "I want to draw you a floorplan of my head and heart." Thanks, Sara (Tegan?), but I'll pass on that. Album opener "I Was Married" is too pointlessly fey to really deserve a spot on the record. "Nineteen" has a good hook and is produced well, but doesn't hold up to the writing elsewhere on the album. But this isn't really emo; there's no ostentatiously displayed heart for the audience to inspect, only then catching a glimpse of the singular depth of the artist's pain. The characters in these tracks are by turns dumbstruck, begging pathetically, floundering in uncertainty, or bravely trying to hide their wounds as they lick them clean while holding a bloody knife behind their backs. Okay, I guess that's kind of emo.