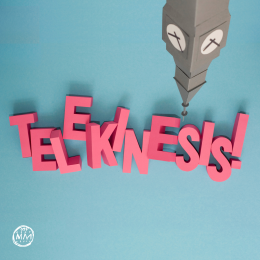 Happy August 24th! It’s “Evaluate Summer” day, which means fruity alcohol mixers, breezy dusks in short-sleeve shirts, and half-faked memories of skylarking teenagers who spent July having hose fights in gardens. Riding the crest of this picturesque hose scene is Michael Benjamin Lerner, the driving force/driver behind Telekinesis with a grill man’s approach to recording: grab idea, flesh it out, and mix to analogue in less than twenty-four hours before moving swiftly to Idea #2. He plays drums, guitar, writes the lyrics and sings, and occasionally ropes in some Seattle buddies to help flesh said ideas even faster.

One such buddy is Death Cab For Cutie’s Chris Walla, who puts his rocketing producer skills to work in keeping a keen edge to the beachwear reverie. The well-trodden chords and archetypal surf angle may sit well with most Middle America, but Walla’s tutelage and Lerner’s enthusiasm keep Telekinesis clear of the MOR trap. These guys are more Mungo Jerry with dry leaves and a magnifying glass, and their self-titled (plus punctuation) debut LP could well be this year’s Cut Copy: infectiously summery, awash with hooks, and a ghost come the start of October. I truly hope not, however, as there’s some real heart on Telekinesis!, as evidenced by not only its incessant chirp but the mischief that serves as its engine (using life-affirming outro to a mini-series “Rust” as a lead-off for the next fifteen tracks is a good sign).

That opening might deliver the precise sandy Americana to help lure Mr. and Mrs. Close-Minded into its web, but it doesn’t take long for the album’s first flinch moment to jab you with its goofy sense of humour. The slap-to-the-face pop-punk of “Coast of Carolina” rings like a million high school montages, its ducking melody and sing-along chorus carousing blissfully. If you’re twelve you’ll think you’ve found Hendrix; if you’re older you’ll remember feeling twelve. The record’s sense of fun possesses a useful kind of spider sense, and uses currents of nonsense to avoid slumping, keeping it from the bad bastard world. Try “Awkward Kisser” for proof: Beach Boy harmonics and a piano cordial that feels like Donny Osmond on a contact buzz, the sugary tales of cherry picnics at odds with the other tracks’ thrash. It’s so wholesomely Californian (practically taste the OJ), and owes as much to Brian Wilson and co. as it does to “Shiny Happy People” Bill Berry. There’s an even more prominent flicker of R.E.M. on the sun-kissed “Great Lakes,” whose strings and thinking-man’s tinges of country inch you gradually ever westward.

So far, so not exactly breaking the mould, but there’s a playfulness to Telekinesis! that, hopefully, you’ll discover on your third listen (you might have a “frisbee the disc” moment on the first listen if it’s raining outside—be warned). The central theme of slacker scuzz is naturally warm and endearing, and wanders a bit too close to sounding all Avril Lavigne before she got married. Or born. Get a load of that nimble rhythm guitar of “Tokyo”: the talisman of Lerner’s love for Old Edo, and the apparent secret source of his funk. OK, so he’s never actually been there, but he dreams about the city every night, you know, and dishes up some wonderful colours whenever he closes his eyes. Here’s a boy who can’t swim and who’s never been to Tokyo doing faultless backstrokes in Japan. Nice.

It’s not all green tea and gardening, though, and the non-stop sense of enjoyment Lerner draws from speaks of some deep-buried phobia. This is easily the kind of record you could play eight times over when sleep keeps on slipping through your fingers, “Calling All Doctors” as its prurient crown with its chug and Radiohead-lite vocals (“Distance really truly makes the heart grow weak / Mine is getting frailer as we speak”). These allegations are further evidenced by the more rough-hewn EP tacked on after the fade of “I Saw Lightning,” where perhaps the rush of Lerner’s ideas was too fast even for Chris Walla to contain. But that’s just 30% of the programme. In general, if you require warp-factor-five acoustic harmonising that beefs up into pubescent surf rock (and we could all use a touch of that—too much bad shit doing the rounds at the moment) then Telekinesis just might slightly move you. Mind trick? No, Lerner’s honesty lasts forty-three minutes, and supplies the predictable yet scrumptious party-time melodies that chase away clouds like a sidekick.