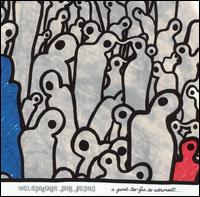 A Point Too Far To Astronaut...

In the interest of trying not to like everything that Anticon has released, I’ve been standoffish with the Restiform Bodies. I’m definitely not going to make any friends here, but I always saw these guys as Sole’s lapdogs---fans first, musicians second, and ultimately derivative and emulative in their work. In his earlier recordings, Passage’s vocals tended to be breathy, high-pitched, cluttered, and altogether suggestive that he very much wanted to be Sole but couldn’t. Because Telephone Jim Jesus’ name was Telephone Jim Jesus, and because Anticon was in the middle of setting itself up as a panel of complainers-against-all-things-rightwing, I figured “well, this all falls into place a little too snugly doesn’t it?” I mean, when your label is the object of a quite-polemic public response---either loved as revelatory progressive heroes or hated as over-sarcastic, pretentious hip-hop bastardizers---it might help to have your own in-house fan club, right?

The thing is, however, it’s becoming more and more apparent that an Anticon apprenticeship is a damn fine musical education. For example, Why? started off as a percussionist, sharing an apartment with Dose in Ohio long before anyone had moved out to Oakland to get ant tattoos. He ended up doing some avantish stuff with Dose on the Greenthink project, had a coming out party with cLOUDDEAD, took one step back with Reaching Quiet, but, by the time Anticon released his split EP with Nosdam, had almost worked out all the bugs. Now after features with Sole and continued work with Dose, he’s a quasi-rap antihero making some of the most interesting weirdo-pop this side of The Unicorns.

With A Point Too Far To Astronaut..., Telephone Jim Jesus further turns the tables on anyone who took a doubter’s approach to second and third-generation Anticonners. He effectively deconstructs any skeptic’s pretense: Astronaut is such a tactful and delicate instrumental electronica record that I feel I should apologize for the past 3 years of cynicism.

To pick apart the array of different elements that present on Astronaut would leave a list longer than Sole’s pony tail (glacial pipes, buzzing synths, battered breaks, and a traditional Russian legend are noteworthy, however). Choosing a standout cut is equally as tough, for all songs work as a calculating cohesive unit. “War Toy” opens the event with the muffled thud-and-bluster of Odd Nosdam’s garbled percussion hits, but quickly moves into an uplifting (if not regal) Thames-River descending scale punctuated by interjecting Nosdam breakdowns and an authoritative voice repeatedly announcing (grumble) “war toy.” The music plays so positively that you accidentally ignore the political commentary (Blair is to Bush as you once thought Restiform was to Sole). “War Toy,” captivating in its happiness, sly in its undercurrent, is the most pop-lifting moment on Astronaut and effectively does its job of surprising you, grabbing/holding your attention (not an easy feat for most electronica), and keeping you still long enough to force you to yield to the beautifully jilted half-melancholy that ensues.

The Pedestrian, Anticon’s resident poet, briefly interjects at random throughout TJJ’s tour-de-force, but shines on the 23 second “A Blindness Falls.” Prior to an un-chopped Books-ish guitar, he challenges “And if you could arm names against forgetting, they’d march, in formation, into the Atlantic, and later, trying to list but one of them, you’d recall only the blue half mile of helmets.” The immediately-ensuing noise of “Pts A & B” follows up the individualist sentiment, muffling the same break used on Sole’s “Bottle of Humans” (and Buck 65’s “Stella,” and a few other beats I used to be able to name off the top of my head) under layers of triumphant, layered chords which soon morph into more moody Tomlab strums. The whole never feels disjointed, and, typical of the record, offers a string of linked good-ideas in rapid succession without ever seeming hashed.

And this shocking quality never lets up, thereby making Astronaut such a striking accomplishment. No two songs blend into an unidentifiable, indistinguishable mass despite there being an overarching electro-brooding “theme” to the record as a whole. The only redundancy is that each song feels a need to remind you that Jim Jesus has a mini-gem on his hands. The album’s two-year gestation period paid off in droves of witty detail, right down to the 80’s-shimmery “Convertible Stingray” where Passage sings “we will crush you” like a wilted Dan Snaith over bombast chiming guitars and posturing drum hits. Not even the protest-everything found-sound vocal clips (my favourite: “Deny a young boy the right to have a toy gun, and you’ll repress his destructive urges, and he’ll turn out to be a homosexual”) overstep their marks, as the consistently contemplative nature of the album lends itself to such brief moments of fortune-cookie preaching. And for every eye-roll or “not again” that might result from the label-trademarked mini-sermons, there are enough moments of unstifled shock-and-awe enchantment to cancel them out twice-over with ear-to-ear grins and “wows”. And since when do we roll our eyes at well done political commentary, anyway?

While some blame Anticon for ruining the phrase “avant-garde,” Telephone Jim Jesus can balance things out by face-lifting another flashy French-borne term: “arriviste” (Dictionary.com word of the day, Sunday, Nov. 7, 2004). It means “A person who has recently attained success but not general acceptance or respect; an upstart.” As far as the lexicon of independent music goes, that translates directly into “Next Big Thing.”