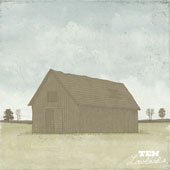 One critique of modern ambient albums is that they often come over-amplified, designed so you won’t have to crank up your volume should your iPod select one on Shuffle. Leeds instrumental act Ten don’t like iPods, and instead choose to shuffle in a different kind of way: they flag themselves as slow/eerie/melancholic and use their loping post-rock textures to warm stages for Codes in the Clouds and Hood (two only-slightly less lo-fi bands). It’s no surprise, then, that after months of watching Ten hypnotise audiences who came looking for art-guitar crescendos, their debut EP Lowlands is as gentle and quiet as a library. You will have to crank your volume if your jukebox selects this one, and if it shuffles something by Joker or Part Chimp next, prepare to receive a Public Order notice. Dominic Deane, the brain behind Ten, believes in giving listeners two stark choices: listen carefully or try next door. It’s at this point we’ll have to wave goodbye to all our sub-bass fans and moshers.

For nearly all of its thirty-one minutes, Lowlands resists any Richter scale tricks and takes vow after vow of silence, feeling more like John Cage’s Christmas contender than a look-at-us debut release. This isn’t a sign of a record in need of red meat, though, or a fortifying talk on introductions, just Deane laying out his unyielding vision, which is one where the world’s thick with feathers.

And feathers don’t necessarily equal niceness: the scrappy drone of “The Absence” warns us of something epic approaching, like a man lighting the fuse on a Godspeed You! Black Emperor rocker. We listen for three minutes, expecting fireworks, but the murky guitar picks only bud out into patterns, and the bang never comes. We quickly learn that this is a cloud-spotters’ album where the grey ones don’t often monsoon. It’s a setup as spooky as a Type Records release, and Deane’s atmospheric acoustics play out like a video of a river changing courses.

In fact, the water’s moving so slowly that by the time the coffee’s made and the first drums hit on “Winter Light,” you can expect your hot beverage to go flying. It’s here where Lowlands makes the first of its many allusions to the Dirty Three: the gypsy waltz studded with piano notes must surely be Warren Ellis’ party piece, back before he went mad, stopped cutting his hair, and stole his clothes off a tramp. The gentle guitar and tambourine Deane intermingles give off a delicious sea shanty vibe, and the song couldn’t get more wintry if you froze it and buried it in snow globes. The most music reference that could be imagined here is Phantom Band entering a coma; it’s something to swing a lantern to as the weather turns blacker and blacker. It’s so absorbing Deane even includes its reflection on “To The Skies,” an underdeveloped reprisal of the same tune which features scraped strings, a piano riff, and strained violins in the background. These little sketches of loneliness make Lowlands a tribute of sorts to Ten’s musical heritage, and Deane has clearly spent a lot of time trying to unsuccessfully fish in the River Aire.

Fishing might be the best way to measure your suitability for Lowlands. If you’re content to dangle your line, sink a few cans, and quietly contemplate the waters, prepare to fall in love with Ten. If you’ve come with a net in search of two-pounders, you’ll need to break up the six tracks with sandwiches. If you’re the kind of punk who throws rice in the water and likes to pick off the fish with an air pistol, then run, run quickly, and keep going in a very straight line. The organ delay and icy tears will have the same affect on you as water torture, even on the more vaguely prominent numbers such as “Low Cloud” (which, if you squint, is Ten’s answer to Snow Patrol’s “Chasing Cars”).

To the patient, however, Lowlands could be a quietly fascinating EP, particularly as it fades into drone horror and twists wurlitzers into film scores. What preceded might sound like Dominic Deane was just taking baby steps, but I get the feeling he’s done his research in his environment, and those tape effects weren’t all bewitching by accident. Maybe he’s been fishing for longer than is healthy, and has had to throw all manner of weird shit back into the river. Drone fans will find the answer when he builds to an album, or lets us see his first b-side.