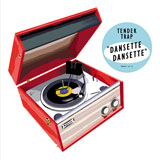 It seems like even the most positive reviews I read of Sleigh Bells’ Treats (2010) included a disclaimer indicating some sort of uncertainty about its staying power. Which, I think, is an embodiment of a bubbling anxiety that for some people extends beyond just that particular record and into the indie world at large. The way we listen to music in the digital age privileges immediacy (“novelty” if you’re nasty), and the way indie media (hi) writes about it often seems to reinforce this notion. Indie stars are born seemingly overnight—plucked from their bedrooms, given a hyphenated descriptor to dangle from a lanyard around their necks, and consumed quickly. The more cynical of us (hi) are a little wary of this, and are driven to ask questions like “Is this any way to make a meaningful, lasting connection with music?”

In the current realm of indie pop, that question nags with added persistence. We’re at a moment when many of the artists who rose to this instant indie stardom through distortion-drenched melody and C86 revivalism are plotting, recording, and releasing their follow-up moves—often making much smaller waves than their initial debuts did. (I’ll here pick on Vivian Girls; though I liked their second record Everything Goes Wrong (2009) and still think it’s pretty underrated, it was received much less enthusiastically than their debut, though both records were pretty similar.) So the cynics might ask, “How can one even have a lasting career in a genre that’s built upon chimera, barrettes, and other such illusions of eternal youth?” Cue dramatic curtain lift on Amelia Fletcher.

Fletcher’s got one of the best indie pop pedigrees of all time: she was a principal songwriter in Talulah Gosh, Marine Research, and, most famously, genre demigods Heavenly. As far as contemporary twee goes, she kinda invented the wheel, or at least the haircut. Her voice is honeyed and coy, her lyrics wistful yet sharp. And over the past twenty odd years, she’s been releasing good music almost without exception. Fletcher’s been playing in Tender Trap with John Downfall and her partner Rob Pursey since 2001. Their latest record, Dansette Dansette, is reminiscent of Heavenly’s career peaks (which is to say: Heavenly vs. Satan [1991]), but more than anything—even considering it apart from Fletcher’s formidable history—it’s just flat-out good.

And Dansette Dansette wastes no time in making you realize this. The lead-off title track kicks into a dreamy sway not ten seconds in. Background vocals from new members Elizabeth Morris and Katrina Dixon add a lush fullness to the band’s sound. “How should I act, what should I do?” Fletcher croons with her distinctive candor. She answers her own question with some familiar nuggets of wisdom: “Lesley Gore, she can’t stop her crying, and the Supremes say you can’t hurry love.”

This exchange is indicative of the record’s—and twee music’s, at its very best—overall relationship with pop music: it’s an undeniable infatuation, coupled with an ever-so-subtle subversion of the very thing it embraces. Much like Camera Obscura’s “Lloyd I’m Ready to Be Heartbroken,” “Dansette Dansette” engages hallowed ghosts of pop music past with playful reverence, but it also hints at their inability to tell anything to you straight. Even after noting the sage advice of Gore and Diana Ross, Fletcher’s left asking, wistfully, “Are you fading now? Is it over? Is it over?” You would really hate to be the one to tell her what Phil Spector is up to these days.

It’s this kind of playful engagement that I’d love to hear more of in the new wave of indie pop. Compare the inquisitive sass of “Do You Want A Boyfriend?” to, say, Best Coast’s “Boyfriend.” The latter’s a pop song (albeit a pretty irresistible one) whose subversion lies not in the songwriting itself but solely in its delivery. Tender Trap’s take feels a bit sharper. By the end, Fletcher’s questioning the point of all her posturing to snag a boy who listens to the Jesus and Mary Chain, all “I’ve been to indie bars…I even changed my hair, but I don’t really see what it’s doing for me.” Pop music’s full of relationship advice, but maybe some of it’s best if not taken at face value.

So, a final word to the cynics and doomsayers who think the Internet has brought this obsession with immediacy and nametags upon us: Fletcher’s weathered this kind of storm before. It was called C86—or at least the initial cassette that NME released that year was; the indie media was quick to turn it into a rather bloated metonym and hang it around the necks of every new pop band to come out of the UK. Including Talulah Gosh, though (minor oversight) they didn’t yet exist when the C86 tape was released. Which goes to show, as does Dansette Dansette, that we needn’t worry about the future. It’ll take care of itself. And the artists who are original enough to remain influential and relevant, like Amelia Fletcher, will do so long after this wave has crashed.