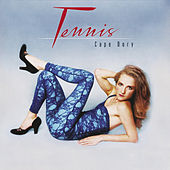 There are few sounds sweeter to this dropout’s ears than the escapist strains of fellow-dropouts Alaina Moore and Patrick Riley of Tennis. However, the elements that make me so excited about this band and this album are the same elements that turn around and start to nit-pick at the edges of its mellowed-out excellence. Humming around like some mosquito on the sun-tanned cheek of this breezy surf-rock album are the small, niggling needs for just a little bit more. Not so much from Moore and Riley, but maybe asking more of the shallow waters and staged clam-dig parties they harvest their songmatter and inspiration from.

From the onset, Tennis make it clear what they’re delivering: ultra-mellow, beach bum dance-pop. With an album loaded to the brim with on-location tracks like “Cape Dory” (also the name of their sailboat), “Bimini Bay,” and “South Carolina,” the songs swish us away, cove by cove and reef by reef, serving to document the married duo’s actual five-mile-per-hour perusal of the Atlantic coast. And Tennis delivers it with a fresh, tiki-lit flourish. Brightly rendered, full of tambourine jingles, bouncy percussion, clean finger snaps, tropical nuances, baby-oil slick slides of guitar, and, maybe the hardest working instrument on Cape Dory, the ’50s pop vocals of Alaina Moore, who in turn punches and coos the lyrics out from a seriously solid center.

From the beginning track, over a hum of an organ and right before the “Take Me Somewhere” chorus, Moore breaks out her bold, uniquely deployed voice, riffing through the songs with all the deceptively effortless bound of a dolphin through wake. Her voice works between Riley’s guitar and pacing to instantaneously speed up the tempo mid-way or just at the verge of chorus to thrust the song into dance-bliss. It’s a fast-forward button tactic that elevates songs like “Cape Dory” from what might otherwise sound like well-executed, ho-hum beach clichés, to something decidedly cool and even a little exquisite. Cape Dory‘s most successful moments happen when this coincides with Moore embracing the same kind of abandon implied in all Tennis’ swept-away lyrics, ultimately capable of pulling me away in her rip-tide vocal runs.

They’re all strong elements that fuse smartly song after song, detailing glimmering moon-on-tide imagery, breezy abandon, and innocent hand-holding, making for a really fun album. But whether it’s the atmosphere of the studio recording or the chill hobby-esque undertaking of the album itself, those moments come a bit rare, or maybe with not as strong a pull as I’m wanting. There’s a restraint or over-easiness that comes over in Moore’s voice on recording. A slight sluggishness compared to her live renditions that begs a little more “Geronimo” of the surf-seeking soul.

I can’t help thinking how besides all the other elements that had me so enthused about Tennis from day one, I deep down expected two philosophy students who shucked their worldly possessions to live on a sailboat, to, well…have more to say about their months behind the mast than looking at nice seashells and other seaside hodgepodge. While Moore’s truly elevating “sha-la-la”s do burn me up with a beachy passion, all they seem to want to do with this beachy passion once it’s acquired is play in the surf and fork up detail that undermines the fact Moore and Riley aren’t just making all this up. A band that is talented and adept enough to afford us a clever field notes version of wave-chasing, veers slightly off into tiki-theme, staged, beach party instead. It’s a wonderful party, but I’m curious what it’d be like if this album wasn’t just another perusing hobby for Tennis. Not that there’s anything wrong with that, necessarily; it is casual seaside rock beget by (literal?) yacht-rockers and the band has raised their mellowed-out flag high. Fair enough. All I’m saying is that while these elements work to flesh out their conch-shell-gazing, the resulting songs don’t always live up to everything they’re putting into it.

The band supposedly has exhausted their seaside documentation of their venture on Cape Dory. It’s clearly a style that works for Moore’s voice and the band’s overall aesthetic to date, while still having plenty of un-tapped depths for a follow-up—and on the other side of “snowmageddon” is a spring begging for a follow-up album delivering that much. But there’s a bright side to Tennis moving beyond the measures of this LP: while tackling newer songmatter, delving into their return to land, maybe their songwriting habits will similarly shift gears with a degree of scrutiny that steps up to the plate and complements everything they brought to Cape Dory. And ideally we’ll see even more of Moore and Riley in a level of challenge they didn’t necessarily bring to this album. Far be it for me to be begrudge these boat bums their carefree, sunbathing lifestyle, but even the salt-crustiest of the lot should dream big and work up a sweat from time to time.