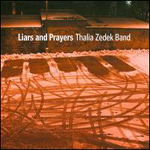 Would it make any sense to say that Thalia Zedek is riding the same windowless train car as Cormac McCarthy? A treble squall of metal-on-metal announces the edges of tenuous balance, and outside it’s very dark, but they dip to tea, pastries, and talk about the weather with gloomy metafiction. They don’t know the destination any better than the rest of us, but know we trust their tactics to understand the situation.

Both seem to peer through the curtains of obfuscation and distraction to look, clear-eyed, at the grime beneath, the unpredictable tenor of new world orders. McCarthy uses the frontier as his canvas, and Zedek twins him by singing with the weight of urban histories. Since the late ’70s she’s explored the unseemly underside of broken hearts and the myopic depressions that follow, fronting numerous groups and appearing on seminal compilations yet somehow remaining underappreciated. Liars and Prayers then sounds like the coda for a near-passed discography from a prototypical artist whose only universality is voice projected into void. “I was moving against the crowd,” she sings on the distillation “Do You Remember,” and there are few singers who could pen those words with the same meaning. Finally, in the twilight of her career, the crowd is ready to move with her.

From the outset of the near-epic rasp of “Next Exit”, Liars and Prayers conjures foreboding imminence—“There is no way out but out”—and patient scrawl, far more systematic than but equal in tone to (if I dare say it) Tom Waits. Stylistically the album is one of the fullest sounds since her time fronting Come; roots guitars, sobbing fiddles, and her pervasively haunted voice scratching in her throat, but the album’s real appeal is how it portrays the occurrence of everyday tragedies in a collective gasp. “Circa the End” is a dread waltz, myriad sadness and unveiled sentiment, in which Zedek is “stuck on a place on this map that I don’t even know.” She’s similarly “across the bridge” in “Lower Allston,” with its defeated trumpet and pre-grunge grunginess. It speaks to experiences we haven’t had, but each of us has something comparable; we all live in the same world she’s singing about.

“Body Memory” and “Come Undone” are good representations of the album’s mid-tempo rock chug. It’s the sort of pace at which Zedek’s injured gait can easily keep astride, and so the tracks do tend to list for all their saturated arrangements and perfunctory performances from what sound like skillful session musicians. “Green and Blue” in particular can grate because of its waterlogged balladry. But the real appeal remains Zedek’s humbled insights, a worldview informed by an affirmation of our common suspicion that “there are some things you can’t see / with a roof over your head,” and, having lived as such, her solitary cold comfort: “if you don’t like the answer / maybe you shouldn’t ask.”

“There are no half measures / Only the lost and the winners” summarizes the album’s sober dedications to potential oblivions in the form of unfair objectivities. Like McCarthy, Zedek is imagining recesses that are all the more terrifying for the real possibility that they truly do exist. Liars and Prayers finally suggests a nihilistic spin on Jeff Tweedy’s more melancholically hopeful “All my lies were only wishes,” from an album that itself was part of presaging an era of music and literature that is resigned to chaotic normalcy: that to lie and to pray are one in the same, disguising desires in the face of calamity. Zedek, having surveyed the shattered results of those kinds of distances, ultimately chooses to do neither, and does us a service in honesty for it.