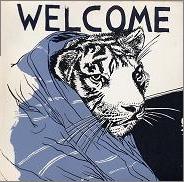 The first murmur from this album is the beginning of a record, the muffled plop of the needle catching. There is hiss. A morose, Appalachian guitar line creeps through imperfections in the vinyl. The hiss continues sadly, and Adrian Orange slips from a trance just long enough to dwarf the guitar with his creaky, “I only want to be welcome.” It’s what yeast sounds like, alive in the quiet, devouring drone of static.

This is Thanksgiving’s Welcome Nowhere, the flagship release from Phil Elverum’s new do-it-yourself-to-the-max company, P.W. Elverum’s & Sun Ltd. From the first tired notes of “Welcome,” Thanksgiving seems to hide under Elverum’s winter jacket, strings of adjectives and placid sylvan landscapes filtered through naked pop folk. “Just Ice” follows, and Orange strengthens his grasp over his material, layering his sulky strumming until it matches his own volume in the mix. Regrettably, having Elverum as such a strong player on the record can easily lead to annoying and belittling Microphones comparisons, but Thanksgiving’s pace is deliberate and seductive, developing a ghastly mountain ennui apart from Phil’s hermetic longing.

“Money” introduces a choir of Anacortes/K Records players sweetly humming and hooing throughout brief washes of digital noise. Orange croons, “I spend my life up this way,” and his dread is arresting. “Do Not Be Afraid” is a quiet fable; Orange’s warning could be called childish if he wasn’t up against the microphone praying for the Apocalypse. Nowhere commands the listener’s full attention, rewarding patience with a satisfying number of brilliant moments, but in an album sometimes stultifying in its slowness, any change in pace or volume has the potential to devastate.

And usually, they do. “Get Married” brings Elverum in for a quick stanza, but his awkward voice bleeds into the rest of the track, allowing a teetering female accompaniment to close in on his scent. The best melody on the album goes to the titular track. A choir of dirty Maquiladora women, huddled against the impending doom of their walk home, sings Orange’s gorgeous yarn through jagged beats. The intensity increases with “Hoo Hoo I Am, Wildly,” a piecemeal serenade that draws from Radiohead and Songs: Ohia. “Years (Seasons)” is the notable failure of Nowhere, though; in four and a half minutes, all the drawbacks and sorry consequences of Thanksgiving’s plodding pace culminate in a boring dirge of feedback. The track ruins the spell of its predecessors so thoroughly that even the amazing highs of songs like “Nowhere” and “Money” shine less brightly.

“Home Alone, pts. 1 & 2” redeems Thanksgiving’s lost glow with a lo-fi gem. The elements are sparse: a steel drum braces against another choir of humming unisex joy: Elverum’s production raises scattered voices from the mix in twisted patterns. It is nothing new, but neither is much Welcome Nowhere; that doesn’t stop it from working beautifully.

Yes, the hiss continues throughout the whole record. It is quite possible that Elverum recorded the CD from the vinyl version of Nowhere (available only at Mt. Eerie shows, Welcome Nowhere comes packaged with a compact disc and a 12”, as well as a water coloring book; the album will be released officially in October), its fireside aesthetic of blips and crackles becoming a bit too distracting at times, sometimes making Thanksgiving’s most recent output a tiring endeavor---especially if patience is not a virtue you want to spend ten dollars on. Even so, its deft sadness is something to be admired.