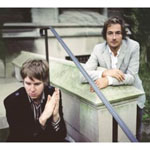 2006 was a big year for me. A year for growth. Expansion. Maturation. I entered my final year of college; I interned at a prominent music publication; I fucking gained ten pounds. My girlfriend noticed first, of course, pinching at my newly protruding belly and giggling something about "Pookie pudge." I don't even know what that means, but it's still there as I write this review, a jelly donut firmly ensconced around my midsection. I've never been the picture of fitness, but as music writers go, I figure I've done okay: varsity tennis in high school, avoided the freshman fifteen until senior year, and on one glorious summer day a few years back I beat my dad in one-on-one basketball. But that's all over. I've gotten fat. I've gone soft.

The Autumn Defense, though, those guys are on a strict carbs-only, high-sugar rock'n'roll diet. Calling The Autumn Defense a soft-rock record is like calling Steve Carrell a pretty funny guy. This is not a record about understatement: during its thirteen songs, it tries its hand at variety of self-satisfied '70s folk-rock clichés. "Canyon Arrow" starts things off with airy Crosby, Stills & Nash guitar picking before sidling into a jazzy rhythm, complete with fairly ridiculous flute soloing. After, "Estate Remains" brings in a string section that would make James Taylor proud. "Feel You Now" gets sexy (or tries to) with bongos and liberal falsetto use. "City Bells" is pure smooth jazz, landing between Burt Bacharach complexity and Carpenters cheese. If all that floats your boat, you'll eventually make it to "This Will Fall Away," a CS&N-meets-Bacharach journey through the mist that peaks with a chorus underscored by John Stirratt's superbly agile bass work.

Now, you'll notice that this album has a pretty good score. I can't help it -- I love this stuff like cookie dough ice cream. Circles (2003) was heartier fare, just as starry-eyed and unabashedly romantic but more focused and elegant. It's a better record, to be sure, but that doesn't make The Autumn Defense a bad one. Much is the same, particularly Stirratt's sweet vocals and wonderfully melodic bass lines. He and Pat Sansone have gotten a little indulgent, is all.

I know what they're going through. Dudes are in Wilco, they're entitled. Me, I had to start going to the gym. It sucks. I miss the holiday season, drinking cartons of eggnog like they were nonfat milk, staying up late to watch Time-Life "AM Gold" infomercials. That was an era when hair was long, guitars were acoustic, and arrangements were shameless. The Autumn Defense takes me back.