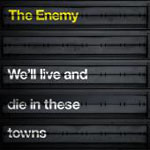 We'll Live and Die in These Towns

So this is probably edition #14 or #15 of that long-running and increasingly erroneous series wherein I skewer the latest borderline-pointless piece of commercially antiquated, mollycoddled hypocrisy that the major labels market as "cutting edge," or sometimes just plain "edge." But take note of that score, you hatebag lot: forty-four percent. Meaning the Enemy's debut record achieved forty-four (full) points in the weekly CMG album contest, placing it way above the likes of Common (34 points) and the Spiderman 3 OST (39 points), but still twelve points shy of the old maverick himself, Mr. David Ryan Adams. Here's a compliment, even: We'll Live And Die In These Towns is punchy, plangent, occasionally rousing stuff: just like the rest of the debuts released by the latest glut of mundane-as-fuck inner city posterboys, of which the Enemy can be counted a talented, if unremarkable addition.

The point being that this album isn't "terrible," just sort of dull and boring. Interestingly, these are the same qualities that the press bandies about when talking about what this band stands for, what they're here to "put right." "Their unwavering self-belief forces cracks of light through the gloomy subject matter" (Observer Music Monthly) being typical of the working class chic levelled at the group, the same "this is our band" shtick that made Oasis slovenly, and way undersold the Stone Roses. And since the Enemy aren't as interesting as either of those two bands -- dynamically, melodically, narcotically -- they fall back entirely on their reputation: "three working class lads from Coventry's cultural wastelands" (NME). It's no big surprise, then, that the music tries so hard to be gritty, so brass-tacks fundamentalist: "Pressure" starts with a faintly atonal cacophony, and opener "Aggro" plays feedback against more feedback.

When the songs do come, they're adjectivally cliché: driving drums, and stabbing guitars, the old doozie of a mis-timed hi-hat on the grace note. But even though that same cliché is consummate, even though a lot of these songs are technically "bad," and even though a fair few of those songs seem more like scene advertisements on why you should dig the record and play the fucker as your funeral music, the music is catchy. The good hooks here work as remorselessly as on Highly Evolved (2002) -- indeed, a few numbers here seem custom-built terrace anthems. "Away From Here" is genuinely addictive, the part on "Technodanceaphobia" where they give Duran Duran a go is funny and kitsch. If the Enemy were a parody band, this would be the best po-faced genre comedy album ever. Ween would be jealous. But therein lies the issue: the Enemy aren't playing for laughs; We'll Live And Die exists in a humor vacuum. It isn't funny because it isn't funny.

The brunt of the record deals with "the system" and "the man": "Spending time in smoky rooms / While haggard old women wearing cheap perfume / Say, 'It never happens for people like us.'" Maybe I just don't "get" this -- the quarry, the quagmire, the quiche of the issue. Better answer: maybe I don't get it because the lyrics kind of suck; maybe it's because it's kind of disingenuous that the band's biggest hit to date rallies us to get "away from here," when the other place, the there, sounds so unadventurous and defiantly old-hat (but nauseatingly catchy, still). Maybe it's because that defiance rings hollow when you're a fucking rock star. I'm not sure.