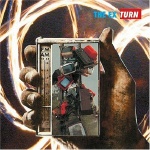 Richard Wright and James Baldwin once had an argument. “All art is protest!” claimed Wright. “Maybe,” retorted Baldwin, considerably more elitist than his contemporary, “but not all protest is art.” A lot of people, me included, are inclined to side with him. When bands define themselves by their politics, I have my guard up. Anarchist punk is a pretty loaded description. It conjures up visions of caterwauling, downtuned guitars over arhythmic percussion, unintelligible screeching about “the system,” “imperialism,” and “lies,” and all played by white guys in dreads and unwashed Assuck t-shirts. These bands seldom fail to represent the worst aspects of political music: a solipsistic morass, deluded into thinking an idea’s very subversiviness makes it art; or worse, sacrificing craftsmanship for ideals.

Few bands could claim to better represent the aesthetic of resistance than The Ex, and doubtless they would side with Wright. The first words of Turn make vocalist GW Sok’s position clear: “We need poets/we need painters/we need poetry and paintings,” he barks in “Listen to the Painters,” a post-punk lunge reminiscent of Fugazi’s “Facet Squared.” “Narrow minds are weapons for mass destruction” he adds, articulating the crux of the whole overwrought debate. In terms of propaganda, provocation and proselytizing, nothing is quite as effective in getting the insurrectionary word out as the arts.

The Ex are that rare band who succeed in making compelling art out of the rubric of their convictions, not merely in spite of or incidentally to it. The message lacks subtlety, but the music is finessed and nuanced, a sort-of hybrid between afro-centric polyrhythm and angular post-punk (The Fall and Gang of Four remain useful comparisons). The music on Turn primarily relies on ensemble rhythms, fitting for a band who proudly advocates street protest. In “The Pie,” Sok hilariously screams a sweet potato recipe before the guitarists come in with bell-like guitar harmonics, recalling the best of EVOL era Sonic Youth. The song swells from there, but it’s the guitars more so than the rhythm-instruments that propel the song’s 13/8 meter. They provide the appropriate bookends to Sok’s “alternative flan of action,” a glorious apologetic-cum-instructional for the recent “pieing” phenomenom. The drums build up quite a head of steam on “3:45AM,” perfectly matching the paranoid insomnia of the lyric. It works so well that when the band steps on the brakes unexpectedly, twice, the song never breaks stride.

The band was berthed from The Netherlands’ anarchist squatter scene some twenty-five years ago, so it’s no surprise that they possess a sharp understanding of history that informs the set’s best songs. “Getatchew” is a tense and menacing improvisational piece, inspired by Ethiopian Jazz pioneer Getatchew Mekurya. “Theme from Konono” has a guitar riff that was pinched from a Konono symphony, but it sounds like they’re reading from Keith Richards’ playbook. They build on, deviate from, and return to this theme, eventually exploding into a bare-knuckled rave up that threatens to unhinge itself from the speakers. “Huriyet” is a straight reading of an Eritrean revolutionary hymn, showcasing that the band’s dynamic strength still persists with the volume down.

For a band that eschews convention with the aplomb that The Ex does, it’s unfortunate that they would fall victim to the old double-album-filler canard. Disc 2 opens with the one-two punch of “Konono” and “Huriyet,” but the rest of it seems like an afterthought. “Sister” finds its groove but not its purpose; the song has great musical interplay, but never takes off. The rest of the album lumbers along, with only the final “In the Event” providing momentary interest. It’s also frustrating that their melodic vocabulary is as stunted as their rhythm is expansive. To that end, I’d like to make a public appeal for drummer Rozemarie to sing more, since she can so well. She provides the lift that makes “Huriyet” the album’s best song, and provides a nice counterweight to Sok in the Adbusters’ anthem, “Prism Song.” “You’re so free, you can buy the lie,” she declaims over an uncharacteristic boogie-woogie, “and lie and lie and lie and lie”

There’s no shortage of acolytes, most of whom should really know better, foisting hosannas on all kinds of lazy porridge when it appeals to their political sympathies. This depreciation of standards is depressing enough without having to be put in the ludicrous position of defending the merits of combining politics and art at all. As if “A Hard Rain’s a-Gonna Fall,” Guernica, or One Hundred Years of Solitude weren’t unqualified masterpieces, or that they could succeed without their sense of outrage. Or as if the MC5, Fugazi, and Godspeed You! Black Emperor were somehow less radical than the 1905. The Ex have been in this pantheon for some time, and if they continue to release records like Turn, they should remain there.