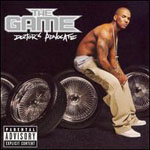 A lot of rappers don’t have to be interesting personalities or drop interesting music; they just need fans and critics who want to be interested in them. To clarify, hip-hop appreciation has a history of valuing the associations, corroborations, indictments, and plain old gossip that come with an artist’s new album as much as, if not more than, the art actually contained within that album. And a fat chunk of the genre has responded by making records that cater directly to that sensibility (hi, Dipset). Thing is, it doesn’t have to be this way. You’ll find references to The Cold Vein (2001) and The Infamous (1995) in this week’s Hell Hath No Fury rave, and while those albums contain a similar sort of No Limit drama, it’s something that’s built into their evocative storytelling and sharp rhyming. These are focused documents that are smart enough to avoid phrasing (and thereby limiting) all their conflict in terms of crew jabs, personal disses, and inter-family rifts -- the type of content that’s sure to grow dated (especially now that Jay-Z and Nas can end the most epic of rap feuds in the bliss of corporate matrimony). And yet, so many emcees and heads continue to feed their scene’s tendency towards being the music world’s equivalent of junior high.

Is that wrong, necessarily? Probably no one’s place to say, but it sure does make some icons out of artists who’d otherwise be commonplace, those individuals staking their fame on their ability to keep the sewing circle yapping. Case in point: Jayceon Taylor, the Game, who’s achieved notoriety mostly through his connections and interactions. I mean, it can’t be his average mic skills and average lyricism that did it for him (and I think “average” here is quite forgiving, considering the “back on the hood” / “crack in the hood” / “back to the hood” triplet in “One Night”). Now that the Game’s got plenty of “behind” the scenes turmoil to fuel the fuss around him, he’s decided to deliver an album that speaks almost entirely to hip-hop’s bustling network of passed notes and between-class text messages. The man did the respectable thing by abstaining from 50 Cent’s moronic GW approach to G-Unit vendettas, but he’s handling the resultant fall-out even worse than how the Dixie Chicks reacted to the disenchanted right wing that they somehow forgot was their audience. Which is to say, the Dixie Chicks now have a full-length documentary that reduces their entirety down to their present feelings of alienation from America, and the Game has this post-Documentary album that spends well over an hour on his present feelings of alienation from Compton, concluding with 9 and a half minutes of, “damn, dogs, ‘Why You Hate the Game?’”

The Dre-lust of Dre-less Doctor’s Advocate has been observed by everyone and their grandmothers at this point, but the obsession’s too manifest and too central to the record to ignore; the Game misses Dre a lot, and he’s gonna make you sit down and hear all about it. Hell, just look at what he called this album, one where he repeats the name “Dre” like the good Doctor might Candyman his ass back into the Game’s life. The “One Blood” single starts with a whisper of “Dre, I see dead people,” then proceeds to have Game rap about how he “ain’t got beef with 50 / no beef with Dre.” Shit gets much more ridiculous: the downright choked-up title track kicks off with “Dre, I ain’t mean to turn my back on you / but I’m a man, and sometimes a man do what he gotta do.” Later: “Now it’s my turn to carry the torch / I still got the chain that you wore on the cover of the Source.” The hook consists of Chauncey Black crooning a mopey inner monologue, and Busta is wrangled into pleading on his “nigga’s” behalf in the last verse; thus, the Game has a shot at becoming the most apologetic gangsta rapper this side of Master P. He bitches at all his current homies for the majority of “One Night” before finishing with “Couldn’t be a real homeboy to save your life / I should have took Doc Dre’s advice.” This is just the tip of the iceberg, the size of which matches the Dre-shaped hole in Jayceon Taylor’s bleeding heart.

All of the album’s innumerable allusions to “the chronic” sound more like “The Chronic,” and on songs like “One Blood” it’s as if the Game recorded his acapellas under the delusion that Dre was coming back to him, that eventually it would be Dre’s beats on Doctor’s Advocate. Taylor’s mating call does, however, succeed in rounding up all the imitators: Scott Storch spooges out “Let’s Ride” and “Too Much,” back-to-back and punctuated with faux-strings; Swizz Beatz’ “Scream On ‘Em” rides one Casio key all night long; DJ Khalil works tinny Guitar Hero bombast and facile drums on “Da Shit”; will.i.am produces “Compton”; and, of course, none of this bumps as emphatically or effectively as a “How We Do” or a “Higher.” No, the musical highlights are Kanye’s smooth Be-style clipper “Wouldn’t Get Far” (though it’s not quite up to “Dreams” snuff) and the Stankonish slow-burn of Hi-Tek’s “Ol’ English.” Here’s the album’s hedged bet: squeaky opener “Lookin’ At You” declares that the Game’s a “reflection of Dr. Dre back in his heyday in the worst way,” so maybe the Game thinks that he can get over Dre by becoming his own Dre -- since he feels justified in now calling himself a producer, and a producer who charges $100,000 per beat because, um, he’s been “studying Dre.” Maybe, under a new and misleading moniker (or identity crisis), Game actually had some beats on Kingdom Come.

It’s true that this review relies heavily on the very chatter that it might seem to demean, but that’s because that’s all the Game, like many of his peers, gives us to hear and think about, so the response comes in like kind. Offering barely more depth than a “Wish you were here” postcard addressed to Aftermath studios, Doctor’s Advocate is essentially a long album of just okay rhymes, just okay rapping, and (without the benefit of best-of-year sublimity like Cool & Dre’s “Hate It or Love It” production) a lot of just okay beats. As rap music, then, Doctor’s Advocate is just okay; as tangled psychodrama, well, it’s just okay rap music.