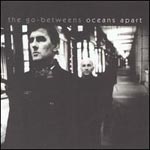 Six songs into Oceans Apart -- the “we thought they were dead” Go-Betweens comeback -- you may just wake up and realize an album is playing. And you’ll think to yourself, “This band is from the late ‘80s, and actually had a cult following?” Because Oceans Apart seems like an unmistakable AOR bore, and you’re pretty sure that, even back in the day, patio music didn’t create cult followings.

There’s a whole bin of this kind of music at your local used CD store: “the pretty and totally uninspired background music” bin. Music with lyrics like “To know yourself is to be yourself / Keeps you walking through these tears.” Songs that can hardly muster even the slightest rhythmic variation, which find a melody and then slowly slosh it about like a fat man drinking the same beer for hours on his yacht. The album’s “overdriven” guitars are polished so much by lush production that they become about as aggressive as newborn kittens.

The kind of pretty instrumental heaping that goes on in “Darlinghurst Nights” might attain some measure of significance if it wasn’t so formulaic throughout Oceans Apart. But the strategy is the same: start with a basic, inoffensive and unambitious melody, repeat it over and over again, toss on a few scatting horns (between three and five notes only, please, and let’s keep dissonance to a minimum) and whatever other trinkets are in the studio, and voila! An instantly forgettable pop breeze.

There are some highs (“Finding You,” with solid melody and delicate instrumentation), which are a few notches above the lows (the utterly weightless and superfluous “Lavender”). The difference tends to be a matter of quality of melody, which is mediocre-to-decent throughout. The instrumentation never really changes, tracks are brief or briefer, the singing is bereft of passion, and distinguishing track from track is much like differentiating between shades of placid, static aquamarine.

It’s all over in under forty minutes, as though it was never playing in the first place. And it might as well have never been; if the Go-Betweens are trying to make a comeback, they could at least sound like they’re putting some sort of effort into it.